Wonder Stories is a record label set up in Brooklyn, New York before settling in Denver, Colorado. It encompasses a leftfield approach to house, disco and techno, maintaining an ethos of experimentalism. Ran by the DJ and producer Aimes, Wonder Stories is still forging forward with new and eclectic music; the label now boasts a discography of over 25 releases from 45 artists.

Cloud Nine, the latest release on the label from Clandestino crew member Joe Morris, is a beautiful downtempo cut. Featuring remixes from Max Essa, Coyote and label head DJ Aimes, the original uses a strong 303 bassline to focus the record. Breakbeats lay over soft pad work that transports you to the White Isle. The Aimes remix thrusts the track into an uplifting stratosphere.

Following the release, we got the Wonder Stories Records boss Aimes to highlight his Top Ten New York House Classics. It felt right to dig a little into the influences of the record label boss, and his selection shows a solid basis of New York dance music that has influenced a large amount of modern musical movements.

Cloud Nine came out on Wonder Stories on July 23rd and you can cop it from all good stores. Check out  Aimes’ Top Ten New York House Classics below…

“As far as newer classics go this one is right up there. These guys were some of the first to reinvent the classic New York disco sound in the early 90’s and 2000’s which became a precursor to the terribly named and often abused ‘Nu Disco’ sound.”

Metro Area are Morgan Geist and Darshan Jesrani, a New York based duo bringing playful experimentation to American club music on the turn of the century.

LNR stands for Larry and Rick; this duo dropped some house classics on Profile as well as House Jam Records throughout the early 90’s.

“A garage classic right here mixed by the man himself.”

Come On, Come On (Don’t Say Maybe) came out on Garage Records in ’84. A clear link with the historic Paradise Garage alongside the Larry Levan Mix.

“Okay, so this is a Chicago house classic… but I’m including it on the list because of it’s frequent plays at clubs in NYC like the Paradise Garage and it’s inevitable influence on NYC house movement.”

Initially released on Underground, the largest sub-label of D.J. International, this record was arguably the first house record to hit the UK Charts Number One spot.

“It doesn’t get any more NYC than this. Proto-house disco boogie, mixed by Larry Levan, on Arthur Russell’s label.”

It’s clear to see the impact of this record from the liner notes, with Leroy  Burgess and James Calloway on production and mixes from Levan as well as M & M (Munzibai and Morales).

“While the the name says it is Hardrive, it’s actually by Masters At Work. This was a pretty massive and influential track.”

With Little Louie Vega and Kenny Dope on production, the vocals from Barbara Tucker have become synonymous of the New York club scene.

“Josh Wink’s debut on Sorted Records (Nervous Records) had all the the driving percussive NYC house sound with signature garage vocals with a touch of summer of love acid. I have to mention Nervous Records on any NYC house list.”

Nervous Records was an important space for Josh Wink, housing 7 of his releases before he set up Ovum Records in 1994.

“The EP that put Kerri on the map with NJ label Express Records.”

Part of the Super Lover EP, this track was Chandler’s first release. It began a music career with over 130 releases as well as his own labels Madhouse Records Inc. and Kaoz Theory.

“Royal House is one of Todd Terry’s many aliases. It’s hilarious that he thanks himself and his dog on the album notes. Todd Terry also sampled this track when he produced the Jungle Brother’s ‘I’ll House You’.”

A track sourced with some great samples, including The Jackson 5, Malcolm X, Afrika Bambaataa and First Choice, this cut kicked off the acid house movement.

“One of the earlier releases from influential NYC label Nu Groove.”

Nu Groove Records was set up by Frank and Karen Mendez, with a sub label Dopewax ran by Kenny Dope as well.

Cloud Nine is released on Wonder Stories on June 25th.
Cop it here. 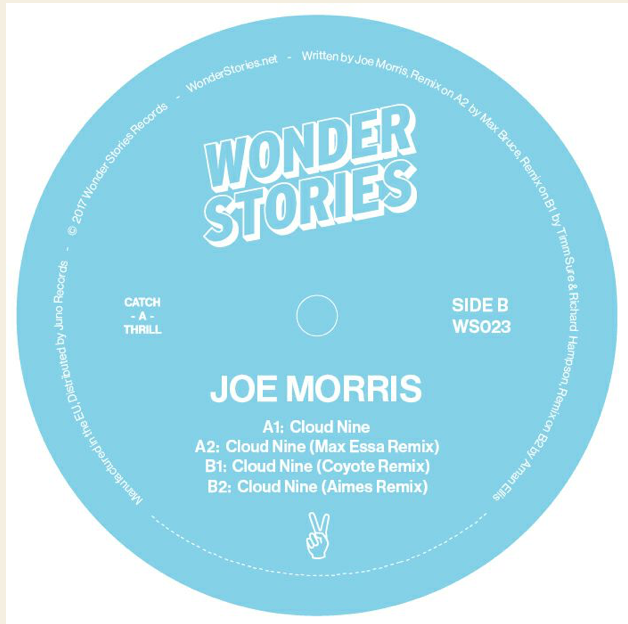