Roots and Influences invites our favourite artists, local and afar, to curate a playlist of 10 songs that have inspired their career to date. This week, we feature the brilliant Brazilian inspired group Baiana! 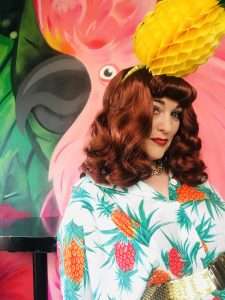 Baiana – which means “girl from Bahia, Brazil” – have been wowing fans with their Brazilian, bossa nova-inspired music. They have released three singles. Miso Loco, Paradise and the forthcoming Voodoo Man! And if that wasn’t exciting enough, there’s also an album in the works, to be released in 2022.

Lead singer of Baiana, Laura Doyle takes you on a musical journey through the songs and sounds that have influenced her musical life…

A young punk, recently landed in Brazil, I knew nothing of the language or the culture. I would wander the streets of Rio – catching a bus to nowhere and back again just to soak things up. A popular TV soap opera set in Rio launched around the same time and I devoured it nightly. This became the soundtrack to those days in Rio and the song that lead me to Bossa Nova.

An artist so important we included him twice! Bossa Nova was the gateway drug and once hooked had me looking for a bigger trip. Searching for more Caetano I discovered a whole new musical movement – Tropicalia. Although somewhat short lived it had a big impact on the music, culture and politics of Brazil and was a Latin rebirth of the hippy movement with its unique vibe and sound

Since I can remember I have been obsessed with old school Hollywood glamour and musicals.  Whilst my friends were grooving to the top ten, I would be searching the “old fart” section at Woolworths looking for 40s and 50s vinyl soundtracks. This song had it all and knocked my socks off. If you see the video of Marilyn singing it, you can see it ticks every Baiana box!

The first pop artist I fell in love with and who’s music I still come back to again and again. As a kid it was such a grown up aspirational sound – who I wanted to be and how I wanted to sound it was so effortlessly cool. It felt exotic with its Spanish influences and voluptuous with its sensial lyrics and till then id never really knew music could be like that.

Like everyone who loves music I am a big Bowie fan and like all fans you fear the dreaded cover version as no-one can surpass him. This album achieved absolute alchemy, in that Seu Jorge, A Brazilian,  whilst covering the greatest artist in the world, in Portuguese, absolutely made this entirely his own. It showed me the power of having your own voice and always looking for something new in a song

All roads lead to Vinicius and his was the first song I dreamt of singing onstage. A poet and a lyricist, this is a rare track that we hear him singing and his voice brings him to life like some musical prophet. When Im looking for inspiration or even sad and frustrated with my music, Vincius always brings me round.

Arguably the greatest Brazilian female vocalist of all time, Ellis brings everything to a song: power, passion, character and a sexy playfulness. It’s voice with huge personality. She was one of the pioneers of MPB (Musica Popular Brasileira) or Brazilian pop. Like Caetano Veloso, I love the way she plays with words and sounds and oh  did I mention the voice!

Joyce is pure joy. Her music combines a beautifully feminine spirit, with a depth of soul, a lightness of touch and a whole heap of Brazilian charm. A songstress and a storyteller, she captures Rio in every lyric. Whilst musically this song is a delight it delivers a powerful message about feminism and telling woman how they can step out of the stereotypes and be a force to be reckoned with

Mambito – Snowboy and the Latin Section.

A pioneer in Afro Cuban and Latin jazz, you cannot underestimate Snowboy’s importance to this music scene in the UK . He’s worked with some of the biggest artists in the Latin world (Airto Moreira, Flaco Jimenez) as well as major mainstream artists (Amy Winehouse, Lisa Stansfield, Mark Ronson). His presence on the scene showed me that a Brit can do Latin jazz with passion and authenticity. When he agreed to work with us and produce our first album it was a dream come true and  a huge turning point for Baiana.

Ceu is the new guard of Brazilian musicians, who takes everything that has come before her, mixes it up and turns into a beautifully unique modern Brazilian sound. This album was very influential for me in that it showed me I didn’t have to be afraid of combining the old and the new when looking to express myself.  Her sound, her voice her style is exquisite.

Baiana’s third single, “Voodoo Man” is out now! Check it out below: