London-based community and platform Sisu turn 4 this August! And to celebrate, we’re hosting a radio takeover alongside their mega birthday party at meraki and North Shore Troubadour on 27th August.

Sisu blossomed from a DJ course held at Southbank Centre in 2017. Melissa, the founder moved to London after studying Events Management in Liverpool and started working at Southbank Centre, before leaving Liverpool she was learning to DJ and these two things combined sparked a fire for her to curate a 6-week DJ course for women that was female-led. Originally called Scratch Collective, Sisu blossomed into a collective powerhouse – with their name drawn from the Finnish word for strength of will and determination.

Founder Melissa/Malissa grew up attending regular events in Liverpool like WAXXX at Haus, Camp and Furnace, Circus, WHP and even Melodic Distraction before it was a radio station! After trying to learn at after parties, where there wasn’t much space to make mistakes and a clear imbalance in gender behind the decks, Melissa wanted to create a safer space where people could feel free to experiment and learn in a structured way on industry standard equipment.

Sisu’s aim when starting out 4 years ago was to educate and inspire women and non-binary DJs and producers. Since then, the vision has come to life in so many ways. From DJ courses, events and podcasts through to mix series’ and workshops, the crew have created an educational and inspirational space to enhance national and international opportunities for their community. They hold a flexible, collaborative and inclusive ethos that is grassroots and community-led, including a rolling DJ roster which nurtures and develops women and non-binary people in their career. 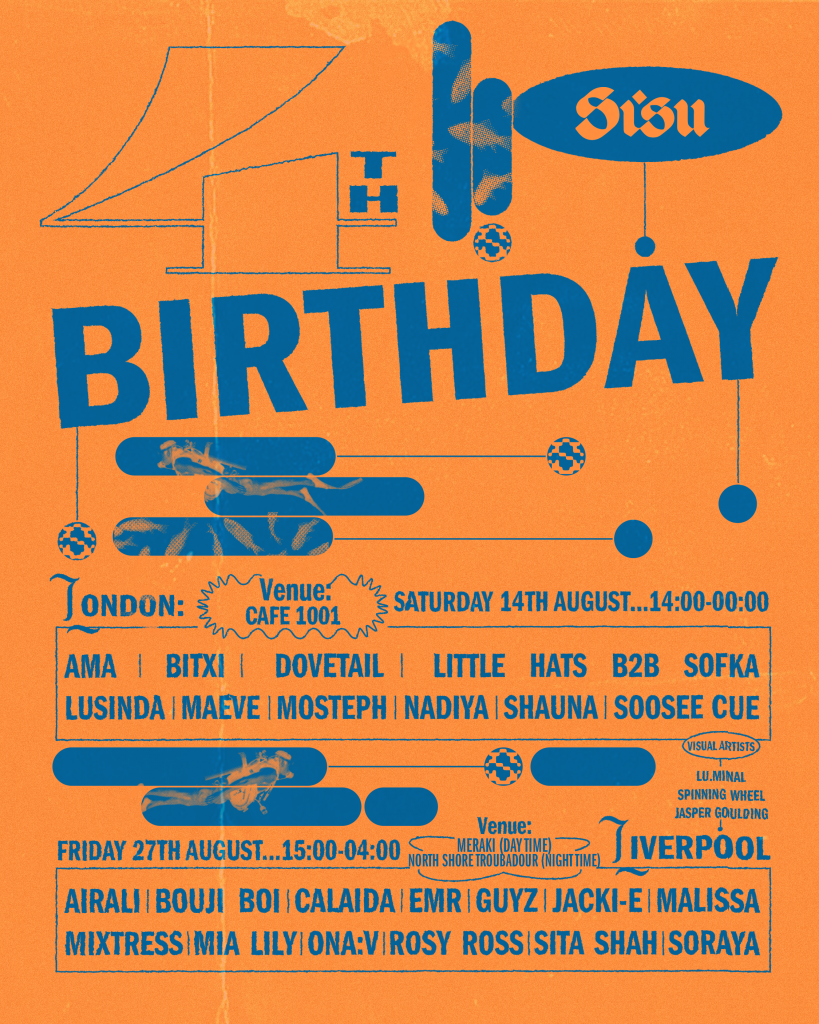 Following an immense party at London’s Cafe 1001 last weekend, Sisu are bringing the celebrations to Liverpool! Their line-up of residents have collectively been featured on the biggest radio stations, signed by top agencies, and are due to play the maddest clubs/festivals this summer, with some of them making their Liverpool debut this bank holiday. The music will be a whole bag of eclecticism throughout the day at meraki, leading into more stompier sounds in the evening at North Shore Troubadour.

They have also opened up a call out to collaborate with digital artists to showcase their work during the club event at North Shore Troubadour – apply before Friday 20th August here.