Mates’ Crates, a series headed up by our friend Andrei Sandu, dives into the tales behind records and digs deeper into our connections to music. These are not reviews, they’re stories. Up next, music royalty collides as Frankie Knuckles remixes Womack & Womack.

Cecil and Linda Womack are legends of the game. It’s in their blood.

Cecil’s brother was famed singer, songwriter and producer Bobby Womack, responsible for The Rolling Stones’ first UK number one along with a host of other R&B, soul, rock and roll and gospel hits. Bobby and Cecil launched their careers as part of R&B group The Valentinos with their three brothers. Sam Cooke was instrumental in promoting the group, and Bobby soon became Cooke’s backing guitarist.

And Linda? She is Sam Cooke’s daughter.

You’ll most likely know Womack and Womack for their 1998 dancefloor silver bullet “Teardrops”. I maintain that there is no moment of any set at which playing “Teardrops” is inappropriate. After “Teardrops”, the duo are probably best known for their soulful 1989 hit “Missin’ Persons Bureau”, off the same album. 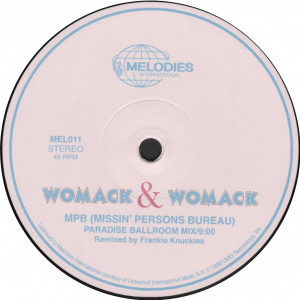 The version of MPB which I bought on sight in Manchester’s Piccadilly Records brings yet more dance music royalty into the mix – this record features two remixes by Frankie Knuckles, the godfather of house. Working with co-producer David Morales (responsible for 1998 piano house smash “Needin’ U”; no relation to John Morales), Knuckles rebuilt “MPB” into a conga-infused synthtastic “Paradise Ballroom Mix”, destined for Larry Levan’s Paradise Garage. Knuckles’ spacious, echoey “Folk Version” is magical on the B-side (listen above).

Just like the creation of the Powerpuff Girls, there’s more to this. Alongside Womack and Womack’s sugar and Frankie Knuckles’ spice, this record’s ‘everything nice’ comes in the form of its re-release on Melodies International, Floating Points and Red Greg’s reissue label. I’m ever grateful to Melodies for letting me get hold of some fantastic music, including Y. Gershovsky’s “Disco Baby” and Le Stim’s “A Tribute To Muhammad Ali” without shelling out hundreds on Discogs. By re-releasing and lovingly remastering Frankie Knuckes’ remixes of “MPB”, they’ve done it again.

Without getting cliché, almost every time I dig into the story of how a record went from an idea to being in my hands, I’m amazed by – and deeply appreciative of – how many incredibly talented people were involved along the way.