Mates’ Crates, a series headed up by our friend Andrei Sandu, dives into the tales behind records and digs deeper into our connections to music. This time a niche, personal connection to Vladimir Cosma’s Sapato Rosa.

Since the start of the year, I’ve had the pleasure of hosting an hour-long Mates’ Crates show on Melodic Distraction Radio, every fourth Sunday morning of the month. The photo I use for it is one of me holding an LP I found in a record shop in Neukoln, Berlin last summer. I picked up “La Doina Roumanie“, by Gheorge Zamfir, maestro of the nai (traditional Romanian pan flute) because I spent the first few years of my life in Bucharest and speak fluent Romanian.

I was reminded of this record when researching and digging (virtual-digging, in the current circumstances) for this month’s radio show. I have always been a big advocate of YouTube as a great tool for discovering music, and its recommendations have served me well on many occasions (and terribly on many, many others).

Last week, I found myself listening to to “Lotus 72 D” by Zé Roberto (not any of the four footballers in Wikipedia’s disambiguation, or the frontman of Azymuth, of the same name). As well as discovering that the song is about Formula 1 car with which Brazilian driver Emerson Fittipaldi won the 1972 Austrian Grand Prix, the magic of the internet pointed me to Sapato Rosa, by French-Romanian composer Vladimir Cosma. 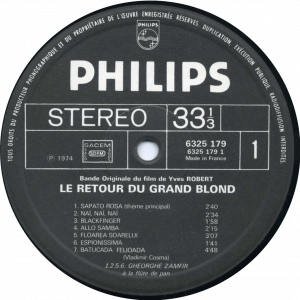 “Sapato Rosa” (Red Shoe) is the theme from “The Return of the Tall Blonde Man With One Black Shoe“, a 1974 French comedy about a spy who is called back into action after retiring to Brazil. Its soundtrack – featuring Gheorge Zamfir – is an incredibly niche crossover of Brazil and Romania-via-France, which feels like it could only ever have materialised in circumstances this coincidental. Discovering that the film was directed by Yves Robert, whose other credits include Year 7 French staple “Le château de ma mère”, only deepened the childhood throwback further.

On many of the tracks on this soundtrack album, including “Sapato Rosa”, traditional apitos (samba whistles) sit alongside Zamfir’s piping in an intersection of global music whose existence I still struggle to believe. Regular listeners will be familiar with my love for Brazilian music, and I never expected to hear some of its defining characteristics blended with the kind of sounds I remember from live bands in traditional restaurants in the city of my birth. The track “Blackfingers”, which surprisingly subtly combines elements of traditional Romanian music with the classic Bond theme, also stuck out to me.

Zamfir came to the public eye when he was approached by Swiss ethnomusicologist Marcel Cellier (curator of the La Doina Roumanie record), who had researched Romanian folk music extensively in the 1960s. Zamfir reached Western European audiences for the first time in 1972, performing on Vladimir Cosma’s soundtrack to “The Tall Blond Man With One Black Shoe” (to which “The Return…” is the sequel). Since then, Zamfir has performed as a soloist in film soundtracks composed by several musicians including Ennio Morricone (for the theme to “Once Upon A Time In America”). Perhaps most famously, Zamfir performed James Last’s “The Lonely Shepherd”, used by Quentin Tarantino as the closing theme in “Kill Bill Volume 1“. On the DVD release of the film, Zamfir is mistakenly credited as the film’s producer.

Discovering all this reminded me how fortuitous our connections to music can be. Zamfir is credited for reviving this folk instrument from obscurity, after soundtracking a French film, the sequel of which is set in Brazil, leading to my discovery via a Música popular brasileira track on YouTube. Nice.