Mates’ Crates, a series headed up by our friend Andrei Sandu, dives into the tales behind records and digs deeper into our connections to music. After a brief summer hiatus, we’re back with a Paradise Garage classic in the form of Venus Dodson’s “Shining”.

Despite only releasing an album and three singles in the two years that she put out music, Venus Dodson’s place in the disco archives is indisputable.

A lot of that owes to her self-described “versatility of Ella Fitzgerald and styling of Sarah Vaughan“. But much will also owe to her collaboration with legendary producer Patrick Adams, who sadly passed away at the end of June.

After performing backing vocals for The Delfonics and Herbie Mann in the mid-seventies, Dodson was introduced to Adams by Christine Wilshire, who had sung on Class Action’s “Weekend” and Musique’s “In The Bush”. Adams later suggested they work on an album.

Written and recorded while Dodson was still performing with her jazz band, this “adventure in disco” gave us “Night Rider” and “Shining”. Paradise Garage resident DJ Larry Levan had worked closely with Adams’ Class Action group, so “Shining” soon found its way into his hands and quickly became a staple at the iconic New York club. 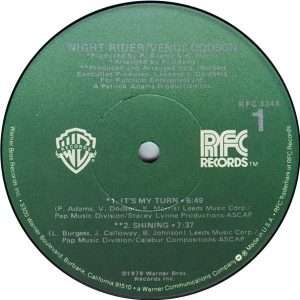 Born in Harlem in 1950, Patrick Adams produced for the likes of Sister Sledge, Rick James, Candi Staton and Eddie Kendricks. He established countless seminal studio projects including Inner Life, Cloud One, and The Universal Robot Band, working particularly closely with Leroy Burgess of Black Ivory (best known for “Mainline” and “Get Down“).

Indeed, it was Burgess who wrote produced “Shining”. A couple of years later, he formed Logg with several musicians including keyboardist former Black Ivory bandmate Russell Patterson and keyboardist Fred McFarlane (who produced Jocelyn Brown’s “Somebody Else’s Guy” and Robin S’ “Show Me Love”!). Logg’s  “Dancing Into The Stars” and “I Know You Will” were both Larry Levan favourites.

Another few years after that, Burgess formed the dance trio Aleem and scored another hit with “Release Yourself“. Did I mention he’s related to Betty Wright, Archie Bell and several members of Kool and the Gang?

Everything I read about seventies New York gives me the impression that everyone knew everyone. Class Action’s “Weekend” was released on Arthur Russell’s Sleeping Bag Records, conceived on the dancefloor at David Mancuso’s Loft. What an era.