Mates’ Crates, a series headed up by our friend Andrei Sandu, dives into the tales behind records and digs deeper into our connections to music. These are not reviews, they’re stories. This time, Two Man Sound’s iconic “Que Tal America”.

And yet, this classic track, which you’ll have heard, whether you know it by name or not, was recorded by a Belgian pop trio (it seems Two Man Sound wasn’t true either…). Released a year after “Disco Samba“, their signature medley of Brazilian pop, the riff on “Que Tal America” is immediately recognisable and not easily forgotten.

To many, the riff is probably best known for its part in American DJ Terrence Parker’s 1996 hit “Somethin’ Here“, which also samples the “aw shucks” from First Choice’s seminal “Let No Man Put Asunder” and the “get it up” from Canadian disco producer Gino Soccio’s “Dancer“. Two Man Sound asked “What’s up, America?”, and America answered. 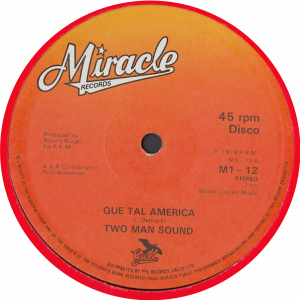 As an aside, if you’ve never seen Terrence Parker play, it’s quite something. Aside from the visual spectacle of his phone-shaped stick headphone, he incorporates hip-hop style chops and scratches into house sets to a greater extent than any other DJ I’ve ever heard.

Interestingly, “Que Tal America” isn’t even the first Belgian disco-samba record I’m aware of, having played “Stories” by The Chakachas on the April episode of the radio show. Just like the music of Two Man Sound, The Chakachas’ records went places. “Stories” featured on Grand Theft Auto V’s funk/soul station The Lowdown (I’ve written more about GTA’s soundtracks here). Their “Yo Soy Cubano” was sampled by Norman Cook (aka. Fatboy Slim)’s “Magic Carpet Ride” and the intro to Kendrick Lemar’s “Backseat Freestyle“.

And just like Two Man Sound, although The Chakachas sound not Cubanos, but Belgas, they could have fooled me. Does this land closer to appropriation than appreciation? I’m not sure. The same year, Two Man Sound’s lead singer scored a minor ska hit, “Kingston, Kingston“, with a different project, called Lou And the Hollywood Bananas…