Mates’ Crates, a series headed up by our friend Andrei Sandu, dives into the tales behind records and digs deeper into our connections to music. These are not reviews, they’re stories. A true disco legend this time, with Thelma Houston’s “If You Feel It”.

With one of the most infectious basslines in disco, this is a classic you won’t be forgetting in a hurry.

First thing’s first, to set the record straight, Thelma Houston is no relation to Whitney. That Houston family had no shortage of talent beyond Whitney herself.  Her mother Cissy is a soul and gospel icon with an enormous discography including the original version of “Midnight Train to Georgia“, later a hit for Gladys Knight and the Pips.

Whitney’s cousin Dionne Warwick also released several successful soul records – of which “Walk On By” and “Walk The Way You Talk“ (sampled by Osunlade and covered by Sergio Mendes) are my favourites. Dionne was also an ambassador to the UN’s Food and Agriculture Organisation.

Another cousin, Dee Dee Warwick (Dionne’s younger sister), scored R&B hits with “I’m Gonna Make You Love Me” (later a successful duet between Diana Ross and The Supremes and The Temptations) and “I (Who Have Nothing)” (later performed by Sylvester, which I’ve written about here). Dee Dee was is also regarded as one of the first openly lesbian performers in the music industry. 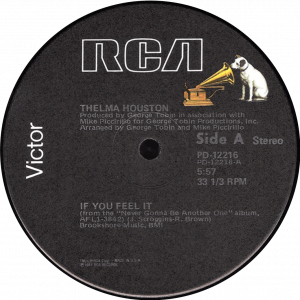 So yes, plenty of flair in that line of Houstons, but Thelma is not on the same family tree. You’re most likely to have heard Thelma’s 1977 chat-topping version of Harold Melvin and The Blue Notes’ “Don’t Leave Me This Way“. Motown had initially assigned the track to Diana Ross, as her follow up to “Love Hangover“, but it was reassigned to Houston instead. In the 1980s, it became an unofficial theme song for the AIDS epidemic in Western gay communities.

Houston scored other hits with “You Used To Hold Me” (one of the most 80s tracks I’ve ever heard) and the simply incredible “Don’t Know Why I Love You“, which I can’t listen to without triggering a flood of euphoric set-closing memories as a student DJ. That track has experienced a recent online explosion after being sampled by Denis Sulta on his “D.K.Y.“. As part of Sisters of Glory alongside CeCe Peniston (of “Finally” fame), Houston performed to Pope John Paul II at the Vatican. I reckon he’d have loved a fat disco baseline.

But I’ve spent long enough talking about everything except my pick now. You can probably tell this column is a wider appreciation of Houston (and indeed all the Houstons, and the Warwicks), as well as a disappointed sigh that “If You Feel It” is the only one I’ve found on wax. As ever, the bargain bucket at Alan’s came through and I get to own that that infectious vocal for ever more. All of this music is excellent and I hope you enjoy it as much as I do.