Mates’ Crates, a series headed up by our friend Andrei Sandu, dives into the tales behind records and digs deeper into our connections to music. These are not reviews, they’re stories. An undying message this time in The Intruders’ version of William DeVaughn’s “Be Thankful For What You Got”.

This soul anthem has been performed so many times that it felt amiss not to run through my favourites.

If you’re into your soul music, I’m sure you’ve heard at least one version of William DeVaughn’s “Be Thankful For What You Got”. I first discovered the version by Philadelphia four-piece, The Intruders, a few years ago, and bought it immediately.

In 1972, William DeVaughn re-wrote “A Cadillac Don’t Come Easy” into “Be Thankful For What You Got”, recording a demo version with many members of Philadelphia’s iconic MFSB group.

As a studio band, MFSB backed Harold Melvin, The O’Jays, Billy Paul and others. As recording artists in their own right, their 1974 single “The Sound Of Philadelphia” was influential in establishing the disco sound, later reaching millions of Americans as the theme for the Soul Train TV show. You’ll also likely have heard their hit “Love Is The Message”, released the same year. MFSB stands for Mother, Father, Sister, Brother (identifying them as a spiritual family of musicians), or for Mother-Fuckin’ Son-of-a-Bitch (a complement the musicians gave each other), depending on who you ask.

With a sound influenced by (and often erroneously attributed to) Curtis Mayfield, DeVaughn’s record sold two million copies on release in 1974. 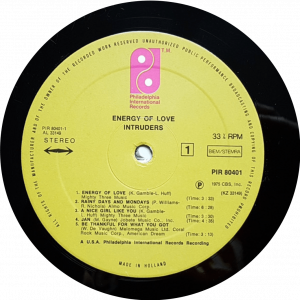 The lyrics are full of references to 70’s luxury. “Gangsta whitewalls” refers to expensive, high-maintenance tyres made without carbon black pigment. “TV antennas in the back” is a nod to the (novelty) antennae which were amongst other luxury add-ons including drinks tumblers, cigarette dispensers, colour-coordinated lipsticks and matching leather notebooks. The “diamond in the back” is the popular sunroof upholstery modification to leave  only a diamond-shaped cut-out in the back window.

In particular, the line “Diamond in the back, sunroof top, diggin’ the scene, with a gangsta lean” has been drawn on by Parliament-Funkadelic, Gabor Szabo, Ludacris, Rihanna, Outkast and others. If you’ve ever seen anyone nonchalantly drive with one hand on the steering wheel and the other rested on the passenger seat, you’ve seen a gangsta lean.

Nonetheless, the message – to value self-worth on moral character and not material possessions – hit home for many and even led to the record being played on gospel stations.

That message is likely also what inspired so many covers (including the version I’ve got by The Intruders). Lee “Scratch” Perry produced a reggae version for Bunny Clarke in 1975; Massive Attack released a cover in 1993; a version by Portrait was used on the soundtrack to the 1993 film Addams Family Values; Omar Lye-Fook released a cover featuring Erykah Badu in 2001; to name but a few.

Unsurprisingly, it has been sampled just as many times, by Ice Cube, Ludacris and most notably by N.W.A. on “Gangsta Gangsta”, which does away with DeVaughn’s anti-materialist message.

As well as a remix by trance and big-beat DJ Paul Oakenfold, the Massive Attack version became famous for its music video, which was banned from all UK TV channels for featuring full-frontal nudity. The band stated that the video was intended not to offend, but to confront the sexism prevalent in many rock videos.

It is short sighted to consider this record as just being ‘peak seventies’. Yes, it is influenced by Curtis Mayfield, performed with MFSB, and majors on custom Cadillacs. But its message, spread wide through tens of samples and covers, is just as relevant today.