Mates’ Crates, a series headed up by our friend Andrei Sandu, dives into the tales behind records and digs deeper into our connections to music. These are not reviews, they’re stories. Next in the spotlight, The Crusaders’ Spiral.

Stood in the almost-empty upstairs room of Shoreditch’s Old Blue Last one evening after dinner with friends, I heard the start of what I thought was Moodymann’s classic Don’t You Want My Love. The vocals never materialised, and after I unsubtly dropped my phone reaching for Shazam, I discovered that this was Spiral, a six-minute jazz masterpiece by The Crusaders.

Over a year later, nonchalantly thumbing through a crate at Liverpool’s Baltic Market (hours before a guest session on Toby Taylor’s It’s Good for the Soul!), I stumbled upon Those Southern Knights, the Crusaders’ 21st studio album. I’d have bought it for the cover art, even before discovering that Spiral was the first track on the A-side.

The Jazz Crusaders came into being in 1952, founded by keyboardist Joe Sample and two high-school friends. Named in homage to Art Blakey’s Jazz Messengers, the group’s unique jazz-soul sound drew a growing crowd after moving from Houston to Los Angeles in 1960. Renamed The Crusaders in 1971, they found particular fame collaborating with Randy Crawford on 1979’s Street Life. You’ve definitely heard Street Life. When 2Pac heard Street Life, it became his 1995 Thug Life because, of course it did. 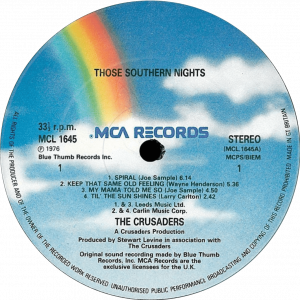 Sample wrote Spiral himself, by this point having also worked as a session keyboardist for Joni Mitchell, Marvin Gaye, Tina Turner and others. While AllMusic’s Richard Ginell describes Spiral as “OK, yet just a bit too frantic for the groove to thrive”, it is my favourite track on the record. It is the perfect blend of funk and jazz, with each Crusader’s solo moment shining through over a thick groovy bassline.

It does make me wonder, though, the Crusaders’ 21st album might have sounded like if any of the tens of talented musicians involved in its conception had crossed paths with one less of the hundreds of talented musicians in their orbit. Would the keys solo on Spiral have sounded different if Sample hadn’t played for Joni Mitchell? Would the arrangement have been different if Levine hadn’t attended the Manhattan School of Music alongside Hugh Masekela, the father of South African jazz? Would Moodymann’s Don’t You Want My Loveexist at all?

In some sense, every single piece of music is the product of every interaction which every musician involved has ever had. For me, this record served as one reminder of that.