Mates’ Crates, a series headed up by our friend Andrei Sandu, dives into the tales behind records and digs deeper into our connections to music. Magical, soulful disco this time with Táta Vega’s cover of Al Johnson’s “I’ve Got My Second Wind”.

The first time I heard this track, probably recommended by a YouTube algorithm somewhere, I don’t think I listened to all five minutes. The second time, hearing Palms Trax close a night at Barbarella’s in Croatia, I was bopping. The third time, towards the end of My Analog  Journal‘s first event, I bought it on my walk home. This one grows.

Born ‘Carmen Rosa Vega’ in Mexico City and raised between New York, Panama and Puerto Rico as her father travelled in the Air Force, her professional career began at the age of just 12. At the age of 17, she legally adopted her childhood nickname of Táta.

In the early 1970s, Motown founder Berry Gordy heard one of Vega’s bands performing and signed them. The label dropped the band when their debut album failed to chart, but Táta stayed on and was taken under the wing of Gordy’s niece Iris. 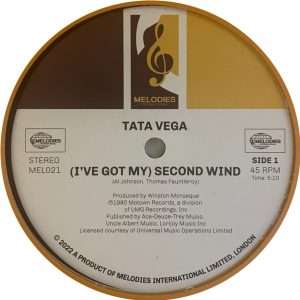 From the four solo albums that followed, two tracks stand out. Her cover of Ned Doheny’s “Get It Up For Love” (also covered by Average White Band) became hugely popular on the UK disco scene. A certified dancefloor heater later remixed by Dimitri from Paris and John Morales, it’s not hard to see why.

But in this piece, the spotlight is on her cover of Al Johnson’s “I’ve Got My Second Wind”. Whilst both versions were released on albums in the same year, neither was released at a single at the time, brought together as the 21st release on Floating Points’ “Melodies International” label. Vega’s version was co-produced by Iris Gordy, with uncredited vocals by G.C. Cameron, lead singer of The Spinners.

As a lead backing vocalist, Vega has performed with the likes of Stevie Wonder, Chaka Khan and Madonna. But perhaps most fascinatingly, Vega recorded two Spanish versions of “Circle of Life” from Disney’s Lion King, one for Latin America and one for Spain. Spot the difference?