Mates’ Crates, a series headed up by our friend Andrei Sandu, dives into the tales behind records and digs deeper into our connections to music. These are not reviews, they’re stories. In the spotlight this week (wasn’t he always?),  the iconic Sylvester with I (Who Have Nothing).

Though I bought this record for the two beauties on the B-side, Sylvester’s phenomenal cover of Ben E King’s I (Who Have Nothing), (itself a cover of Joe Sentieri’s Uno dei Tanti) is just as stunning. Just as Ben E King’s performance in 1963 feels symbolic of a time and place, so does Sylvester’s. Ten minutes long, it is a disco record, not a blues 45′.

The dramatic strings and gospel chord changes make for a dancefloor-ready record whilst somehow maintaining the melancholy tone of unrequited love which dominates the original. With lyrics written by Lieber and Stoller, most famous for Elvis’ Hound Dog, it is unsurprising that King’s version is, in every sense, traditional. With the partner of the singer’s love interest a “she”, Sylvester’s version is not. I have a habit of devaluing the word ‘inimitable’ by overusing it when writing about music. But I’m struggling to find a better word to describe this record, or Sylvester in general. 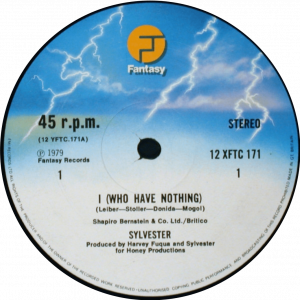 The B-side features two of my favourite Sylvester-Patrick Cowley collaborations (the other being Do You Wanna Funk). Cowley is the unsung hero of dance music, and the profound influence of his six-year career, cut tragically short by AIDS in 1982, cannot be overstated. Last year when I, a far better writer than I am now, began research for my Melodic Distraction piece on Cowley, it really changed my perspective on the origins of electronic music.

You Make Me Feel (Mighty Real) began as a  mid-tempo piano driven gospel song produced by Harvey Fuqua, Motown‘s Head of Artist Development. After he heard a rehearsal of the song at a San Francisco club, Cowley transformed it into the disco anthem it is now revered as.

Also on the B-side, I was surprised to find an instrumental of I Need Somebody to Love Tonight, which began it’s life as a particular kind of soundtrack, produced by Cowley for Fox Studio’s School Daze, to which I won’t provide a link… Like Cowley himself, this track was ahead of its time, and certainly doesn’t feel like it was produced almost forty years ago.

An all-killer-no-filler record, this is an aptly-selected showcase of Sylvester, Patrick Cowley, and the power of their collaboration.