Mates’ Crates, a series headed up by our friend Andrei Sandu, dives into the tales behind records and digs deeper into our connections to music. These are not reviews, they’re stories. This time, Smokey Robinson’s classic Being With You.

Most will have encountered this R&B anthem, or one of the iconic samples drawn from it, whether they know it or not.

When the weather on the first day of a spring escape to the south of France took a turn for the worse, I took cover in Nice’s Sonic Import. With crates of 12″s up against both walls of the narrow space, unsorted stacks on the floor, and the owner’s tiny dog running riot, digging felt closer to an episode of American Pickers than flicking through the racks at Phonica. As is often the case in such places, the real treasures weren’t neatly categorised on shelves. I must’ve bought about a quarter of the varied stack of 45s by the door, including this Smokey Robinson classic. 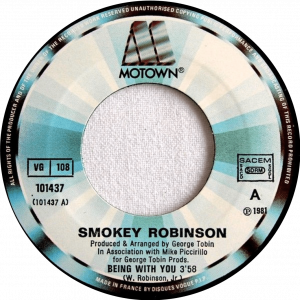 A mature soloist, with twenty years already under his belt as a founding member of The Miracles, Robinson combines a conventional R&B male falsetto with his unique dusky croon – smokey, if you will. Despite how well it fits his distinctive voice, he gained the nickname aged three; a cowboy identity given to him by his uncle Claude when watching Westerns together.

It is claimed that Smokey wrote around 4,000 songs over the course of his lengthy career, including seminal soul classics like My Girl by The Temptations and Marvin Gaye’s Ain’t That Peculiar. As Les Back writes in an interesting piece on the feminism of Smokey’s lyrics, his songs are not tales of male bragging or synthetic romance. Love in Smokey Robinson songs is often vulnerability.

Contemporary reviews of Being With You separated Robinson’s breathtaking idiosyncrasies from the songs themselves, with Rolling Stone’s Stephen Holden writing: “It’s amazing what subtle vocal inflections can do for material that’s less than terrific”. I’m less critical of the record, but it would indeed have been unremarkable without Robinson. That the most common sample from the record is the vocalising in the opening seconds is testament to this.

His warm “Oooh” has inspired everyone from Cam’ron and Reks to Katy Perry just last year. The opening verse seemed to capture the imagination of 2012’s Eton Messy-era deep house producers AMTRAC and Dublin Aunts. Even a pre-It’s Only Real Denis Sulta pairs a reverb-heavy sample of Smokey’s full vocal with stripped-back percussion and a dark synth on the haunting A.A.S..