Mates’ Crates, a series headed up by our friend Andrei Sandu, dives into the tales behind records and digs deeper into our connections to music. As winter closes in, today’s pick is an escape to warmer climes: Rabo De Saia’s “Ripa Na Xulipa”.

Part of what attracts me to digging is getting hold of a real piece of musical history, and in that vein, reissues feel a bit like cheating. But when originals are going for over £100 a pop (or £286.61 in the case of Fronzena Harris’ “Lovetime Guarantee”, of which I bought a 2019 repress recently) my wallet and I are happy to cheat.

This isn’t the first repress by French label Favourite Recordings in my collection either – The Joubert Singers’ “Stand On The Word” was amongst my first Mates’ Crates columns. This time, Favourite combine three bits of fantastic Brazilian disco on a single 12″ – how could I say no?

I played the A-side – Paniel De Controle’s “Relax” on April’s Mates’ Crates show. It is written by Brazilian songwriting legends Lincoln Olivetti and Robson Jorge (of Aleluia fame), and you can tell. Whilst the band’s name brings back a few too many childhood memories of pressing Ctrl+Alt+Del to un-crash Windows XP, it strikes the perfect balance between upbeat and mellow to start any day right. “Relax” is great. But only one track on this record truly has my heart. 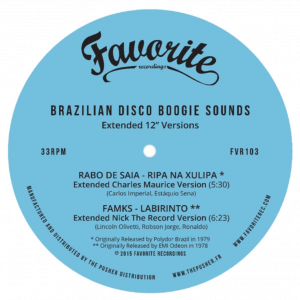 “Ripa Na Xulipa” is perfection. As Charles Vaughan knows from every set we’ve played together, it only takes the two-second intro of this track to get me fired up. Rabo De Saia (which Google reliably informs me is Portuguese for “skirt trail”) was an all female Brazilian disco group in the 1970s, formed of the dancers on a TV show hosted by the actor Carlos Imperial. In their two years, they recorded four tracks, all composed by Imperial, across two 7″s.

With a band name as inappropriately seventies as “Skirt Trail”, I had to ask myself – what does “Ripa Na Xulipa” actually mean. When a Brazilian friend told me they were made-up nonsense words, I was gutted. Luckily, Reddit came to the rescue, explaining that it was a phrase popularised by up-and-coming football commentator Osmar Santos as a form of encouragement for players. In the literal sense, it means “throw the wooden slab at the lazy people”, and is a slang complement in many Brazilian states.

Unfortunately, the rest of the lyrics are mostly nonsensical rhyming sounds. In the line “tatu saci-pererê”, for example, “tatu” is an armadillo and “saci-pererê” is a one-legged mythical prankster in Brazilian folklore.

Fortunately, I don’t care. This tune is an absolute dancefloor weapon and I’m delighted to have it on wax, even if I’m cheating.