Mates’ Crates, a series headed up by our friend Andrei Sandu, dives into the tales behind records and digs deeper into our connections to music. These are not reviews, they’re stories. To kick off 2020, Otis Redding‘s cover of “A Change Is Gonna Come“.

I don’t know what Otis Redding would think of the fact that I discovered his “Try A Little Tenderness”, now one of my favourite soul tracks, through Kanye and Jay Z’s Otis. Hopefully he can cut me some slack for having been only 15 at the time. A couple of years later, I leapt on this slightly beat-up copy of Otis Blue when I spotted it in a local charity shop.

Just before Christmas, Pitchfork re-posted an article on Protest Soul, centred around Sam Cooke’s “A Change Is Gonna Come”. It was saddening to realise that the list of relevant tragedies at the start of the article has only grown since its 2016 publication, making its message all the more relevant. A true soul classic, it has been covered by Otis Redding (above), Aretha Franklin, Luther Vandross and Baby Huey, amongst many others. Bettye LaVette sang it at President Obama’s inauguration, with a hopefulness no longer present at recent renditions by marchers and mourners. 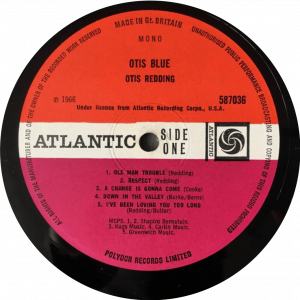 Cooke wrote “A Change is Gonna Come” after he, his wife, and his band were denied access to motel rooms they had reserved, on racial grounds, and Cooke was arrested for disturbing the peace.  When Cooke wrote the lyrics, he worried that obvious references to Jim Crow segregation laws would be too obvious – indeed, these lines were cut for radio play. The record was released just ten days before Cooke died after he was shot by a Los Angeles motel manager, allegedly in self-defence.

Another key inspiration was Bob Dylan’s “Blowin’ in the Wind”, which Cooke incorporated into his repertoire almost immediately after hearing it. Dylan had borrowed the melody from “No More Auction Block For Me”, a marching song for black Civil War Soldiers which in turn inspired the Civil Rights anthem “We Shall Overcome”.

A Change is Gonna Come is a reminder of both the lineage of soul music, and of its power to capture and instil the full range of human emotion – four tracks later on Otis Blue, “My Girl” is three minutes of sheer joy.

It would be unfair to highlight the ongoing sociopolitical struggles of the last decade without acknowledging several instances of progress. But for those ongoing issues, at the start of a new year, we can hope that a change is gonna come.