Mates’ Crates, a series headed up by our friend Andrei Sandu, dives into the tales behind records and digs deeper into our connections to music. These are not reviews, they’re stories. For the final pick of the year, Odyssey’s Hang Together.

I have a very magpie-like approach to crate-digging, and will happily buy an album for a single track on it. Whilst my wallet doesn’t always thank me, one of the perks of going about collecting in this way is that I’ll surprise myself by already owning tracks I didn’t know I wanted at the time.

Six or seven years ago, naive young me bought Earth, Wind & Fire’s 1979 album I Am entirely because it had “Boogie Wonderland” on. Earlier this year, digging into the tracklist of Soul Sister’s fantastic New Orleans Boiler Room, I discovered Earth Wind and Fire’s “Let Your Feelings Show”. Much to my surprise, it was and always had been on the A-side of I Am. One less Discogs shipping fee, right? 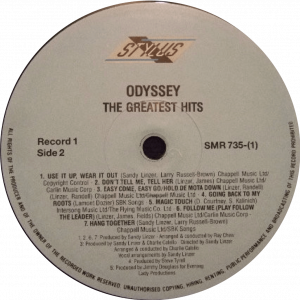 Last weekend brought a similar experience. I had the privilege of helping set up, and then attending, a Lucky Cloud Loft Party. One of the records played was Odyssey’s fantastic “Hang Together”. I was equally delighted to discover that I already owned it on a Greatest Hits I’d picked up in Liverpool’s Baltic Market over the summer.

Starting out as The Lopez Sisters, Lillian, Louise and Carmen brought together an ever-changing collection of musicians to score a string of hits including “Native New Yorker”, “Inside Out”, and the cover of Lamont Dozier’s “Going Back To My Roots” for which I bought the album. Vocalist Romina Johnson, involved with Odyssey throughout the seventies and eighties, later featured on Chic’s “My Forbidden Lover” and Artful Dodger’s “Movin’ Too Fast” in 2000. Now based in the UK, Odyssey are still going strong, led by Lillian’s son Steven Collazo.

At a time when people seem more divided than ever, it felt right to wrap up Mates’ Crates for the year with a simple reminder that “we gotta hang together”. In the two years since I’ve been writing these columns in one form or another, the close ties between people and cultures over time never fail to make themselves known. Let’s not forget that.