Mates’ Crates, a series headed up by our friend Andrei Sandu, dives into the tales behind records and digs deeper into our connections to music. These are not reviews, they’re stories. Some gospel for your Sunday this time, with New York Community Choir and Express Yourself.

One of my most recent digging finds, the first time I heard this gospel disco gem was somehow after buying it.

There’s an intense power and passion to the layered vocals of the ‘call and response’ format of a gospel choir, and I’ve been digging for more and more of it lately.  Flicking through the gospel crate at the fantastic Alan’s Records in East Finchley, I came across what I expected (and perhaps, hoped) to be a gospel version of Charles Wright’s funk classic of the same name, famously sampled by N.W.A. What I got was even better.

With spiritual gospel vocals over lively drums and a bouncy bassline, Express Yourself was a Bronx classic in the early 80s, played by Grand Master Flash amongst others. Clocking in at an impressive eleven minutes, the second half consists mostly of a whirlwind drum solo, ripe for the chopping by early hip hop DJs (I’m picturing purple crayon all over this record, á la The Get Down). 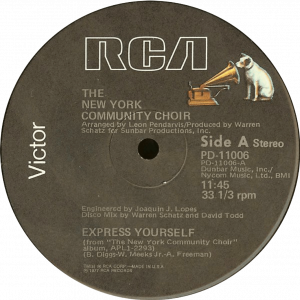 I also learnt that it was produced by Warren Schatz, who worked on Evelyn ‘Champagne’ King’s Shame the same year. And the daughter of the New York Community Choir’s lead vocalist provided the R’n’B vocals on Will Smith’s Men in Black theme some twenty years later.

More than just being a really groovy disco track, Express Yourself strikes me as a prototype and predecessor of the kind of classic New York house that was later released on labels like Strictly Rhythm (Ultra Naté’s Free, for example). Unsurprisingly, the Choir’s director,  Benny Diggs, went on to compose and sing backing vocals for house legends including Roger Sanchez, Masters at Work and Erick Morillo.

Express Yourself is a stellar A-side, and Have A Good Time on the flip leans even more towards the choir’s gospel roots, bringing a bit of Sunday morning to your Saturday night.