Mates’ Crates, a series headed up by our friend Andrei Sandu, dives into the tales behind records and digs deeper into our connections to music. Samples on samples this time with a deep dive into the DNA of mid/late-2o10s house hits via Melba Moore’s “Pick Me Up, I’ll Dance”.

Disco legend Melba Moore has been sampled over a hundred times, but one stands out.

I’ve always been fascinated by the Hollywood concept of twin films: two near-identical movies released the same year. “Antz” vs. “A Bug’s Life”, “The Prestige” vs. “The Illusionist”, “Olympus Has Fallen vs. White House Down”, the list goes on. Sometimes as a result of studios investing in similar scripts at the same time, sometimes due to staff moves and industrial espionage, it happens more often than you think.

The story of Midland’s “Final Credits” and DJ Koze’s “Pick Up” is nothing like twin films, but it did surprise me that two house tracks with the same vocal sample got quite so big at pretty much the same time. I really don’t mean to deride either producer here – each record is successful on its own merits, but the common sample was certainly notable. Indeed, Manchester-based DJ had released “Goodbye“, drawing on the same Gladys Knight and The Pips vocal in 2015.

Where am I going with this? To be honest, I had to remind myself too. Whilst Midland combined the Knight vocal with the riff from Lee Aldred’s rare 1980 funk track “Rockin, Poppin’, Full Tilting” (recently repressed for Record Store Day 2020), DJ Koze’s sampled from Melba Moore’s 1978 disco hit “Pick Me Up, I’ll Dance” (while we’re here, so did Doc Daneeka on “Magnolia”). 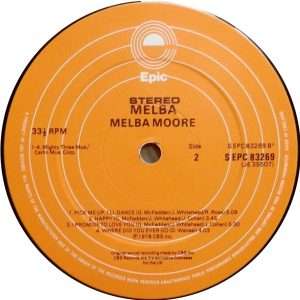 In the late 1970s, Moore teamed up with production duo McFadden and Whitehead (best known for “Ain’t No Stopping Us Now“) to release her album “Melba”, which I picked up last week (no pun intended). Alongside “Pick Me Up, I’ll Dance”, it also features her excellent cover of the Bee Gees “You Stepped Into My Life”.

In 1986, Moore led the cast of the sitcom “Melba”, which was created as a vehicle for her career. Perhaps because it premiered the same day as the Space Shuttle Challenger disaster, viewership was very poor and CBS immediately pulled the show from its schedule, airing the remaining episodes six months later.

Moore continues to perform to this day, notably starring in the Broadway production of “Les Miserables” in 1995, and most recently took to the stage in 2018.