Mates’ Crates, a series headed up by our friend Andrei Sandu, dives into the tales behind records and digs deeper into our connections to music. A soul legend covers a disco legend this time, with Marlena Shaw’s take on “Touch Me In The Morning”.

Combining the musical prowess of Diana Ross and Marlena Shaw was only going to end one way. This record is heart-wrenching  and high-energy all at once.

In 1973, jazz blues and soul singer Marlena Shaw sang at the Montreux Jazz Festival, on the shore of Lake Geneva. The recording of her performance, released on Blue Note Records, is seminal. She opens with her 1969 track “Woman of the Ghetto“, but this is not like the studio recording. This electrifying live version addresses gender and race discrimination in America like almost nothing that came before, as Tim Lawrence (co-founder of Lucky Cloud and author of “Love Saves The Day“) writes in Classic Albums by Women.

The song has been covered several times, and I played my favourite version by Phyllis Dillon on the Mates’ Crates show this time last year. The live version was sampled by French producer St. Germain on “Rose Rouge” and by Blue Boy on the immediately-recognisable crossover hit “Remember Me” – sampling Shaw’s line about black woman often raising  the children of wealthy white families. British singer-songwriter Jorja Smith covered “Rose Rouge” last year for Blue Note Reimagined. 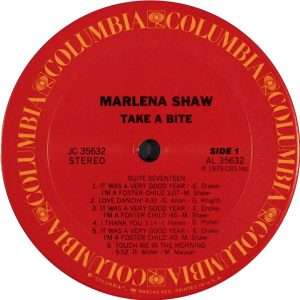 The same year Shaw performed at Montreaux, Diana Ross secured her second solo Number 1 with “Touch Me In The Morning“, three years after leaving The Supremes. Recorded in the early hours (as became usual after Ross began raising her children) songwriter Michael Masser said that she pushed particularly hard to get the vocals right for this track.

Then in 1979, these two worlds collided. Just as her performance of “Woman of the Ghetto” took things to another level, Marlena Shaw’s cover of “Touch Me In The Morning” is something else. Laugher or tears, joy or dejection, it’s not clear how to feel. Capturing raw emotion alongside fierce strength and dancefloor energy, this track is everything at the same time.

With that lineage, you could say it isn’t surprising, but this record is truly spectacular.