Mates’ Crates, a series headed up by our friend Andrei Sandu, dives into the tales behind records and digs deeper into our connections to music. An iconic disco sample this time with Made in U.S.A.’s “Never Gonna Let You Go”.

I’m not sure which of Theo Parrish’s Ugly Edit or DJ Harvey’s Juicy Sushi I encountered on the dancefloor first, but both blew me away.

I’m not sure it matters; they’re not really that different (change my mind). Both producers spotted impeccable, brass-driven groove of Made in U.S.A.’s 1977 “Never Gonna Let You Go” – the opening track of the bands eponymous (and only) album – and realised that the world would be a better place if that groove were extended as long as possible.

Parrish’s 2002 edit, clocking in at ten minutes, wins in that respect. The only thing ugly about it is that it took until 2019 to get the sample cleared for an official vinyl release. Harvey, on the other hand, released his unlicensed version in 1994 on his own Black Cock Records, founded two years prior to celebrate the art of the disco edit and put seventies instrumentals centre stage.

Having sung the line “Never Gonna Let You Go” to myself quite so many times before the powerful saxophone stabs in either edit, I was surprised that the energy doesn’t build the same way in the original, in which laid back, heartfelt vocals kicked in every time I expected more. As negative as this might sound, I think it makes the piece all the more beautiful, a rollercoaster which offered something wholly new when I finally found it. 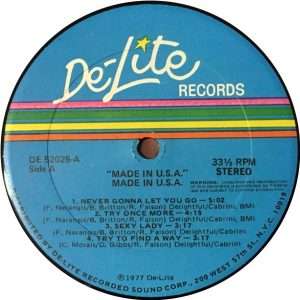 The find itself was a stroke of luck when I found a sealed copy of the 1977 album for just a tenner. Pristine and unopened since it was pressed almost 50 years ago, a bit of me didn’t want to open it (the rest did, so I proceeded to listen to it many times, very loud). The whole album is full of gems, from the lead single “Melodies” to my second-favourite track “Sexy Lady“.

Made in U.S.A. (Unity, Strength, Ambition) formed in 1975, hand-picked from a host of Brooklyn musicians who had already worked with the likes of Ben E. King, Joe Bataan and Ecstasy, Passion and Pain (not necessarily on the songs I’ve linked!). Everything on their recordings was performed by members themselves, so it could be replicated live. Their first single fared well, but was hampered by distribution issues at the record label. Their second – “Shake Your Body” – didn’t chart, and without gigs or hit records, the members disbanded in 1977.

Whether we call them hidden gems, rare groove, or buried treasure, I always wonder about the set of circumstances which leads music (or literature, paintings, or indeed any art) to be more celebrated decades later. Whatever happened in the mid-nineties that didn’t happen in the mid-seventies, let’s be glad we’ve found them now.

And now that we have, let’s never let them go.