Mates’ Crates, a series headed up by our friend Andrei Sandu, dives into the tales behind records and digs deeper into our connections to music. These are not reviews, they’re stories. This time, a guest post from Melodic Distraction’s own Toby Taylor, cratedigger extraordinaire and boogie virtuoso behind It’s Good For The Soul.

Appearing on Jeremy Spellacey’s excellent compilation for Crown Ruler Sound, this uplifting South African boogie number is sure to put a smile on anyone’s face, no matter what day it is.

Now I must admit I know very little about this track, other than that it was written and produced by South African producer and song-writer Hendrik Lebona. Lebona had a prolific career within the South African music scene, independently producing and writing for a whole host of different acts, including giants such as Paul Simon (helping to produce his epic record Graceland), Babsy Mlangeni and less well known groups such as the Soweto Soul Gospel Singers. Indeed his career is all the more remarkable considering that he suffered from considerable issues with his vision throughout his life, which would lead him to found the South African Blind Musicians Association. His contributions to South African music were recognised when he was awarded the Life Time Achievement award by the South African Music Awards. He sadly passed away in 2013.

The record itself is a thing of beauty. Laboda’s skilful production is on full display here, as he effortlessly combines the various instrumental and vocal layers so that none are allowed to dominate. Each is allowed to naturally come to the fore and then recede, creating the laidback groove on which the track’s calming and uplifting tone relies on.  The percussion is firm, but never overpowering, as if the drummer was himself suffering from the very same hangover that the initial lyrics allude to. 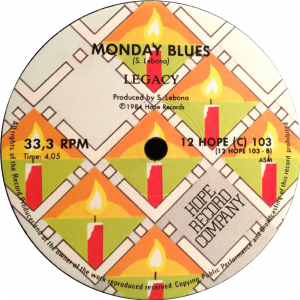 Likewise, the vocals are easy on the ears and the vocal melodies are delightfully cheery, emphasising the lyrical message of uplift perfectly. I particularly enjoy the ways in which the spacey synths interject between the vocal passages, injecting the track with a further layer of cosmic elevation and emotional positivity. Underneath, the bass mirrors the rising and falling melodies of the vocals, further underscoring the sense of uplift that is at the very heart of this track. Be sure to keep an ear out for the times when the walking bass line becomes more prominent, because they are amongst the record’s finest moments.

It’s really hard to pick an element of this record that I like the most, because it’s a record where I believe the whole is greater than the sum of its parts. The credit therefore lies with Lapona – for he not only wrote, but also produced this track and ultimately crafted one of the cheeriest slabs of wax you’re ever likely to hear.

You can catch choice cuts from Toby on It’s Good For The Soul, every first Sunday of the month on Melodic Distraction Radio.