Mates’ Crates, a series headed up by our friend Andrei Sandu, dives into the tales behind records and digs deeper into our connections to music. These are not reviews, they’re stories. Another Melodies International repress now with Le Stim’s “A Tribute To Muhammad Ali”

True to form, Melodies International fulfilled my dreams by repressing this funky anthem. The story goes that Ali himself heard and liked it.

Le Stim was a Detroit band formed in the late 70s, fronted by gospel singer Donald Jennings. More used to performing Nat King Cole and Sam Cooke, it took five years for songwriter Herbert Andrei Duncan to convince him to perform the vocals on this funky masterpiece, as Jennings feared they were out of his range.

Reissuing Le Stim was Melodies’ biggest research project yet, tracking down Duncan’s former house in Detroit only to discover it had burned down, then finding his family in Texas and securing the rights to remaster the record. Earlier this month, I penned my appreciation for another Melodies reissue – Womack & Womack’s “Missin’ Persons Bureau”.

In 1980, Jennings caved and an anthem was born. Duncan didn’t have any money to record the song, so he struck a deal with a drummer to provide seventeen musicians in exchange for use of his PA. The brass and keys melt into each other while Jennings and the backing vocalists praise the Champion of Fighters for over nine minutes straight, occasionally interrupted by beautiful guitar solos. 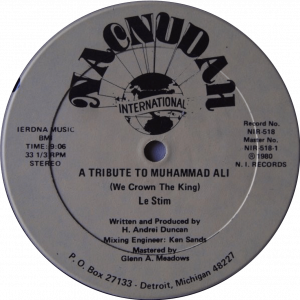 Ali was no stranger to the music world, in both the first and second person, having released a cover of the Ben E. King classic “Stand By Me”, and inspired a host of other music. Don Covay’s “Rumble In The Jungle” was a tribute to Ali’s iconic bout with George Foreman in 1974. Miles Davis – a huge boxing fan – recorded “Ali” in 1970 (read about the controversy behind that release here). British dance duo Faithless (famous for “Insomnia“) released “Muhammad Ali” in 2001, which also samples Archie Bell and The Drells’ “Strategy“). Though it reached #7 in the UK charts, Ali reportedly hated British reggae artist Jonny Wakelin’s “Black Superman” – perhaps because it had first been recorded as “Hungarian Superman” about rival boxer Joe Bugner. Whitney Houston’s “Greatest Love Of All” was written for a 1977 Ali biopic, first a hit for George Benson, then for Whitney.

For me though, no tribute comes close to Le Stim’s. Given its rarity, it’s unsurprising that the original pressing of this lighthearted and uplifting masterpiece goes for over $600, so I’m ever grateful to Melodies International for the opportunity to own it. I picked it up at a record fair at the now-closed  Giant Steps in Hackney Wick (run by the crew behind Dalston’s Brilliant Corners and named after the John Coltrane record). I remember buying this, Coldcut’s remix of Eric B. & Rakim’s “Paid In Full”, and a fantastic Japanese dub record before seeing Nu Guinea and Donna Leake play. A cracking afternoon.