Mates’ Crates, a series headed up by our friend Andrei Sandu, dives into the tales behind records and digs deeper into our connections to music. These are not reviews, they’re stories. This time, Lamont Dozier’s Going Back to My Roots.

In 1990, Lamont Dozier entered the Rock & Roll Hall of Fame for his part in the Holland-Dozier-Holland Motown production team, responsible for everything from The Supremes’ “Baby Love” and The Four Tops’ “Reach Out, I’ll be There” to The Supremes’ “You Keep Me Hangin’ On” and Marvin Gaye’s “How Sweet it is to be Loved by You”.

The opening lines of The Isley Brothers’ This Old Heart of Mine are from the ‘theme song’ Dozier sang himself to get out of bed in the morning. The opening “Sugar Pie, Honey Bunch” in The Four Tops’  “I Can’t Help Myself” was Dozier’s grandfather’s catchphrase. The Bernadette they sung of was Dozier’s childhood crush.

Many reviewers tie the record to the seminal 1977 TV mini-series Roots, which depicted a modern-day African American tracing his ancestry back through the slave trade. Nervous about  viewership, ABC packed the cast with poet Maya Angelou, football star OJ Simpson and Robert Reed of the Brady Bunch. Contrary to these expectations, the series finale was watched by 85% of US households with TVs, breaking all existing records and still the second-most watched series finale in US history. The series was based on Alex Haley’s 1976 novel of the same name. According to Haley, central character Kunta Kinte (inspiration for Kendrick Lemar’s King Kunta) was based on one of his ancestors. 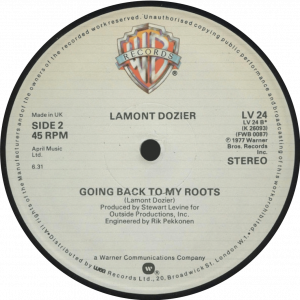 The record’s musical history is yet more complex. If you’ve heard legendary South African trumpeter Hugh Masekela’s 1984 underground classic Don’t Go Lose It Baby, you’ll notice how similar the synth line is to the rhythm guitar on Going Back to My Roots. Masakela helped produce Dozier’s album (including this track), as did Stewart Levine, who produced The Crusaders’ Spiral, which I wrote about for Mates’ Crates earlier this month.

In truth, however, Going Back to My Roots originates with Nigerian saxophonist and singer Orlando Julius. Julius relocated to the US in 1974, to work with musicians including Louis Armstrong, James Brown and Gil Scott Heron. In a fascinating interview, he explains how Masakela used several key elements of his Yoruba composition Ashiko on the Dozier record, without ever crediting Julius. As a sidenote, I discovered more incredible Yoruba music on Fiesta de Bembe, a record I picked up in Cienfuegos, Cuba and wrote about in another Mates’ Crates piece.

Finding Dozier’s Going Back to My Roots on the B-Side of Boogie Business in Reckless Records’ bargain bin last year was a reminder of the joys of digging. Finding Odyssey’s fantastic cover (now resurgent after Folamour’s Boiler Room) in a crate at Liverpool’s Baltic Market earlier this summer was also an unexpected surprise.

Most of all, though, hearing Colleen Murphy end her set at Boiler Room Festival with Dozier’s original gave me chills. Colleen is one of my musical heroes, having worked closely with the legendary David Mancuso and his Loft parties. Just before he sadly passed away in 2016, I wrote a Disco Reflections piece on Mancuso, here on Melodic Distraction. This record means yet more to me, having closed my final set at university with it after almost two years of weekly residencies. Hearing Colleen Murphy do the same was a magical moment.

Soaking up years of history and culture, both musical and broader, Going Back to My Roots is a truly special record.