Mates’ Crates, a series headed up by our friend Andrei Sandu, dives into the tales behind records and digs deeper into our connections to music. This time, to Japan, with Kei Ishiguro’s “Rain”.

I can’t remember where or when I first heard Kei Ishiguro’s “Rain” (雨, pronounced “Ame”). I could spend the rest of this piece expressing my appreciation of the logographic Kanji alphabet – logographic because the characters are visual representations of words and concepts. But having finally come to terms with the fact that 雨 looks like rainfall, I’ll move on.

I have lots of thoughts for this piece, but in a bid to appease WordPress’ readability algorithm (which frequently tells me that mine needs improvement), I’ll attempt a concise summary. I love this album and I’ve wanted it for ages. Receiving it for Christmas was magical.

“Rain” sounds like the glass-half-full optimism I wish I had. Other highlights on the album include the painfully-short “Driving Crazy” and the potassium-infused “BANANA“, which features on recent a Nippon Funk compilation alongside Masayoshi Takanaka, whose “Brazilian Skies” I wrote about last year. 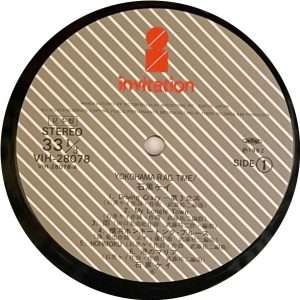 I was disappointed by how little I could find about Ishiguro online. Whilst a thrillingly nostalgic reminder of how far the internet has come, her distinctly Windows XP website shed very little light.

On the other hand, I could write at length about Japanese city pop. In short, the economic boom of the late 1970s saw the emergence of new, Western-influenced music aimed at an emerging class of wealthy, city-dwelling listeners with Walkmans and cassette decks in their cars. Felix Thompson does a much better job of explaining this here.

Regular readers / listeners will know I’m fascinated by cultural crossovers, so was immediately drawn to hearing distinctly African-American genres like Jazz and Funk performed in Japanese. Coupled with beautiful art which I can only describe – in a probably culturally unaware way – as feeling distinctly Japanese, albums like Yokohama Ragtime are simply wonderful.