Mates’ Crates, a series headed up by our friend Andrei Sandu, dives into the tales behind records and digs deeper into our connections to music. More dancefloor heat this time with Jenny Burton’s “Bad Habits”.

What I do know about Jenny Burton is that it’s her iconic vocals on the incredible “Bad Habits”. This track is just so good. When you realise how impeccably crafted this record is, it comes as no surprise that it was produced by Fred McFarlane, the man behind Jocelyn Brown’s classic “Somebody Else’s Guy” and Robin S’s seminal “Show Me Love“. 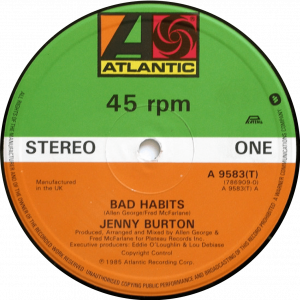 But although I play this track at almost every available opportunity, I first discovered that vocal from a rather different corner of the music world. In 2013, in the heyday of the first wave of wonky UK bass music, dubstep pioneer Loefah released a DJ tool called “Veal“, sampling Burton’s vocal, as a free download for Christmas.

According to Paul C Jasen’s “Low End Theory: Bass, Bodies and the Materiality of Sonic Experience”, Lofeah “was known for having a dark and minimal style that used powerful basslines and menacing vocal samples in order to create a sense of dread”. Whilst you’ve read the last 42 words just to set me up for a Peep Show reference (the longer the note, the more dread, right?), he really does make Burton sound menacing.

Listening back now to the Boiler Room set in which I first heard “Veal” was a strange experience. Whichever genre you call it, I haven’t really listened to it in about five years. And yet, three minutes in, I could almost smell the sixth-form common room and had to remind myself that I’m 25 and don’t need to worry about revising for my A-Levels.

I’m conscious that this column is now hundreds of miles from where it started, but the speed and intensity with which pieces of music hurled me into my memories threw me a bit. The sultry sound of Jenny Burton has been with me for more seven years now, in one form or another. Long may that continue.