Mates’ Crates, a series headed up by our friend Andrei Sandu, dives into the tales behind records and digs deeper into our connections to music. This time, Spanish singer Ivan with a sample you’ll recognise and a stellar album track you won’t.

The tracks on Ivan’s 1985 album “Baila” are almost as cool as the jacket he’s wearing on the cover. Dare I say, they’re even cooler.

If you’ve ever heard Swedish DJ Kornél Kovács 2015 hit “Pantalón” (read, “if you set foot in a club playing house music that year”), you’ll recognise why I bought this album. You won’t catch me writing a bad word about Kornél, but he just put a kick on Ivan’s masterpiece “Sueños de Papel” (translated as “Sunday Afternoon” despite actually being Spanish for “Paper Dreams”).

Born Juan Carlos Ramos Vaquero in Madrid in 1962, Ivan was discovered by a producer for the CBS record label and had hits in Mexico, Colombia, Ecuador and Chile before his career was interrupted by compulsory military service. I also discovered that his daughter starred in the Hollywood film “Bratz” (yes, like the dolls). 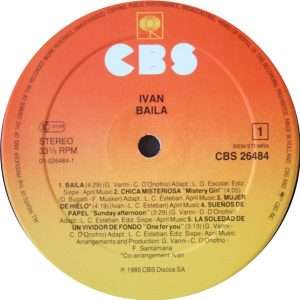 “Sueños de Papel” makes me daydream about cruising down the South American coast in a convertible with the roof down, and I can’t even drive.

I was happy enough when the LP arrived in the post, but nothing could prepare me for the pure elation of hearing “Fotonovela” for the first time. What starts with a fairly generic eighties beat and what sounds like an accordion grows into my favourite track I’ve found this month. Cue the xylophone. Cue the silky smooth vocals. Cue the soaring strings. I ran round the room with my arms out like I was an aeroplane, because this song makes me feel like I can fly.

But really, it doesn’t matter who found them. This is beautiful music, enjoy it.