Mates’ Crates, a series headed up by our friend Andrei Sandu, dives into the tales behind records and digs deeper into our connections to music. These are not reviews, they’re stories. In the spotlight this time, legendary producer John Morales and his spectacular version of Inner Life’s Ain’t No Mountain High Enough.

What was the first remix you ever heard? The first time you encountered the idea that a song could be chopped up and put together in a completely new way? Was it better, worse, or just different?

The remix is now a ubiquitous part of dance music. In the 1970s, self-taught sound engineer John Morales was one of only a handful of producers and engineers perfecting the art of the remix, after finding that most tracks were too short for his club sets. By the end of the decade, the M&M Mixes he produced with his partner Sergio Munzibai became a staple of the New York dancefloor.

At the height of the disco era, the duo played Stardust Ballroom, Pippins and the infamous Studio 54, with over 650 remixes and edits to their name. M&M produced for everyone from Jocelyn Brown to The Temptations; Tina Turner to The Rolling Stones, Spandau Ballet to Aretha Franklin; Candi Staton to Hall & Oates.

Morales began working in his local record store at the age of twelve, paid not in dollars but in records. His first sets were in his father’s bar in Jersey City, and his first edits were put together by hand, cutting up pieces of tape in his bedroom. His first credited remix came in 1979: Inner Life’s Caught Up (In A One Night Love Affair). You can listen to the man himself recall his musical journey on his RA Exchange interview. 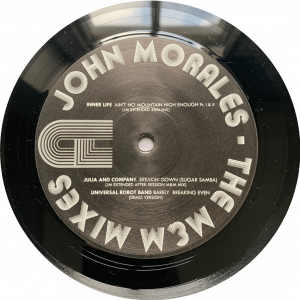 With Morales from a Puerto-Rican family and Munzibai born in Cuba, the duo distinguished themselves by drawing on their heritage to incorporate Latin percussion into many of their productions. Munzibai – the more sociable of the two – handled the politics and promotion, allowing Morales to focus on the music. Munzibai sadly passed away in 1991, but Morales is still producing and playing out today.

This previously unreleased seventeen-minute version of Inner Life’s Ain’t No Mountain High Enough was the first Morales production I ever came across. I bought it immediately.

Most remixes, especially nowadays, involve a tech-house producer putting a heavier kick on an original then making a mint on royalties as their club-ready version becomes the go-to for DJs. This was a reminder of what a remix can be, indeed, what remixes once were. A real re-orchestration, creating something truly new and truly spectacular, with the talent of a composer, not a thirty-day free trial of Ableton Live and some premade loops.

I’ll stop ranting now, best just listen to it, all the way through. I still get chills. Nothing has compared ever since. After much thought, I’ve picked out ten of my favourite John Morales and M&M productions for your listening pleasure.