Mates’ Crates, a series headed up by our friend Andrei Sandu, dives into the tales behind records and digs deeper into our connections to music. Groundbreaking electronics this time with Harry Thumann’s “Underwater”.

“Charles”, I ask the delightful Mr. Vaughan, “what’s that song you played me a while ago which was like the perfect soundtrack to riding your horse off into the sunset, but your horse is a spaceship?”

True to form, Charles figured out what I was after pretty quickly. I’d heard Harry Thumann’s 1979 “Underwater” several times in several places, but was only struck with the inspiration to pin it down last week. The perfect blend of the orchestral and the electronic by a synth pioneer, I haven’t been able to get it out of my head since.

Most disco (or indeed, music) enthusiasts have heard of Giorgio Moroder, “the father of disco” (albeit probably not the only one to claim that title – disco’s family tree is a spider’s web and that’s what makes it beautiful). Fewer have heard of Patrick Cowley, something I tried to do my bit to rectify a few years ago with this piece. But I’ll openly admit that I hadn’t acknowledged Thumann’s contribution until very recently.

Harald Thumann was born in Germany in 1952 and entered the music world as a drummer and audio engineer for radio before starting to experiment in a makeshift studio he set up in his bedroom. From the 196os, Thumann designed and built groundbreaking studio equipment, including early adoption of MIDI to control modular synth setups using a Commodore 64 computer. 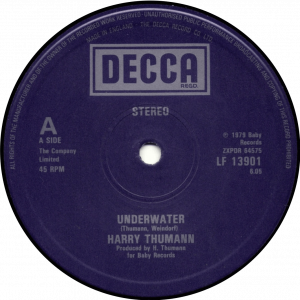 As is evident on “Underwater” and several albums  he produced for Italian orchestra Rondò Veneziano, Thumann’s combination of acoustic and synthesised instruments set him apart from his contemporaries. His relatively limited discography (two albums, totalling thirteen tracks) influenced a generation of producers to harness the infinite potential of new electronic tools. The most influential track on Thumann’s second album was “Sphinx“, which later inspired the theme to Knight Rider.

But as I reflected on the familiarity of “Underwater”, I realised that I had listened to it dozens of times driving Niko Bellic to go bowling with his cousin Roman in Grand Theft Auto IV. I acknowledge the series’ spectacular soundtracks as often as I can, and GTA IV’s K109 is no different. Hosted by fashion designer Karl Lagerfeld (voicing himself), it also featured Gino Soccio’s synthesised spectacular “Dancer“, Cerrone’s “Supernature” and Rainbow Brown’s “‘Till You Surrender” (later sampled on Gerd Janson’s festival hit).

So the next time you ride your horse off into the sunset, but your horse is actually a spaceship, stick Harry on.