Mates’ Crates, a series headed up by our friend Andrei Sandu, dives into the tales behind records and digs deeper into our connections to music. These are not reviews, they’re stories. This time, the unmistakable vocals of Teddy Pendergrass on Harold Melvin and The Blue Notes’ “Bad Luck”.

A few weeks ago, while digging at Bristol’s St. Nicholas Market, I picked up the sleeve of Harold Melvin and The Blue Notes’ “Wake Up Everybody“. I love that song. From hearing it played at Lucky Cloud to closing my first ever Mates’ Crates Radio show with it back in January, it means a lot. Not only had I found the single, but the album, which also features “Don’t Leave Me This Way“, later covered by Thelma Houston. And for £8. I couldn’t believe my luck, and bought it immediately.

Fast forward two days, I’m home and listening through all the 12s I picked up on the trip. Inside that sleeve is not “Wake Up Everybody” but “To Be True”, another album by Harold Melvin and the Blue Notes, released ten months earlier. I was gutted and annoyed with myself in equal measure. After discovering “Bad Luck”, though, everything was fine.

In 1954, an R&B group called The Charlemagnes – led by Harold Melvin – renamed itself The Blue Notes. Its lineup changed frequently (a departing member even set up a rival group called The Original Blue Notes), with  Teddy Pendergrass recruited as backing drummer in 1970 and soon promoted to lead singer after further departures. By 1971, the band’s full name was “Harold Melvin & the Blue Notes featuring Theodore Pendergrass”. 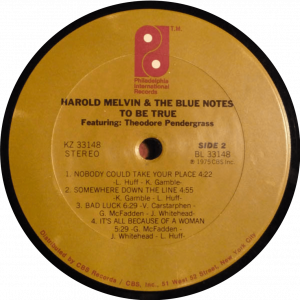 Throughout this period, the band worked with Leon Huff and Kenneth Gamble’s Philadelphia International Records label, with many of their records (including “Bad Luck” and “Wake Up Everybody”) written and produced by McFadden and Whitehead (most famous for their own hit “Ain’t No Stopping Us Now“). For thirteen years, label boss Kenneth Gamble was married to the R&B single Dee Dee Sharp giving us the Dee Dee Sharp Gamble who sang “Breaking and Entering“.

I’d definitely heard “Bad Luck” before owning it, though I didn’t know who it was by. It took the first thirty seconds to cheer up my disappointment. The strings, brass and vocals are signature Philly Sound, and I’ll definitely be playing this one a lot. After his time with Harold Melvin and The Blue Notes, Pendergrass went on to have a successful solo career. My favourites of his are “You Can’t Hide from Yourself“, written by Huff and Gamble (just try and resist those strings!) and “The More I Get, The More I Want“, also written by McFadden and Whitehead. His career was almost ended by a paralysing car accident in 1982, but he continued to perform until 2006, before he passed away in 2010.

A reminder of the realities of digging, I picked up this record by accident and wasn’t initially best pleased, but Teddy P. delivered the goods. If anyone does have a spare copy of “Wake Up Everybody”, though, do hit me up.