Mates’ Crates, a series headed up by our friend Andrei Sandu, dives into the tales behind records and digs deeper into our connections to music. Up next, “Let’s Start The Dance” by R’n’B and disco icon Hamilton Bohannon, who sadly passed away last month.

A few weeks ago, legendary Motown drummer and disco producer Hamilton Bohannon passed away. In January, on a trip to the North West for my first Mates’ Crates radio show on Melodic Distraction, I picked up Bohannon’s classic “Let’s Start The Dance” at Vinyl Resting Place in Affleck’s Palace, Manchester.

Affleck’s Palace began as Affleck & Brown in the 1860s, a drapery business which grew into a department store. Business declined after WWII, leading to its eventual closure in 1973. Almost ten years later, Affleck’s Palace opened as a safe, affordable and flexible place for entrepreneurs to start out, an atmosphere that lent itself to  becoming a haven for alternative culture.

During that visit to Vinyl Resting Place, I’d already picked up Cheryl Lynn’s “Shake It Up Tonight”, Gene Chandler’s “When You’re Number 1” and the incredible “All My Love” by LAX for just a few pound each. Finding more seemed so unlikely, yet “Let’s Start The Dance” peeked out at me from one of the bargain buckets.

You might not know that you’ve heard this record, or indeed any of Bohannon’s discography, but I’m sure you have. Carolyn Crawford’s vocals on this record are iconic – on a quick tangent, the self-referential lyrics remind me a little of the legendary Live At Montreux version of Marlena Shaw’s “Woman Of The Ghetto”. But yes, Crawford’s iconic vocals on this record have been sampled countless times. 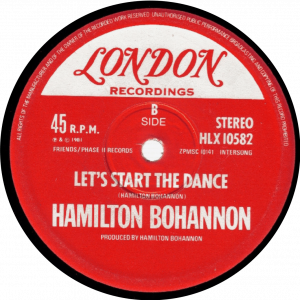 Before his production work, Bohannon entered the industry as a drummer, starting out in local bands, including one featuring Jimi Hendrix. Recruited into the touring band of a then-thirteen-year-old Stevie Wonder in 1964, Motown soon employed Bohannon as leader and arranger of the label’s band. Over several years, he performed with acts across the label’s roster, including Stevie Wonder, Smokey Robinson, Marvin Gaye, The Temptations, Diana Ross and The Four Tops.

Whether as a sample or behind the vocals of the soul elite, you’ve heard Bohannon. His role in music is captured in Tom Tom Club’s seminal “Genius of Love” (another one you’ll probably have heard, knowingly or otherwise), with the line: “Who needs to think when your feed just go Bohannon, Bohannon, Bohannon, Bohannon”. Indeed, a street in his birth-town of Newnan, Georgia was named after him in 2017.

His recent passing reminded me of the small piece of (his) music history I picked up earlier this year. A devout Christian, Bohannon dedicated his album “Dance Your Ass Off” to God, adding the disclaimer that the title is not used in the sense of profanity. If you hadn’t heard it, or known who it was till now, now is as good an opportunity as any to Dance Your Ass Off to Bohannon.