Mates’ Crates, a series headed up by our friend Andrei Sandu, dives into the tales behind records and digs deeper into our connections to music. These are not reviews, they’re stories. An extra special record this time: Fiesta de Bembé from the Cuban Grupo de Tambores Niloniyé.

A phenomenal record (in the most literal sense) of Yoruba culture in Western Cuba.

I spent two weeks of October exploring Cuba, visiting Havana, Trinidad, Cienfuegos and Viñales. It is an incredible country of deep contrasts, where the only two constants are its proud and hospitable people and its omnipresent music. On every corner, there is a guitar, a boombox or a group improvising on cardboard boxes. Just like Cuba’s cultural heritage, its music is wonderfully varied, from dance-orientated salsa, bolero and danzón to lyrical son, ballad-like trova and even a burgeoning hip hop scene.

When I learned of Librería La Fernandina in the coastal city of Cienfuegos, Cuba’s pearl of the south, I knew it would be my kind of place. Lonely Planet listed it as stocking books, vintage magazines, collectibles and other pre- and post-revolutionary curiosities. What I found was a treasure trove of casino chips, advertising, badges, posters, propaganda and, of course, records. 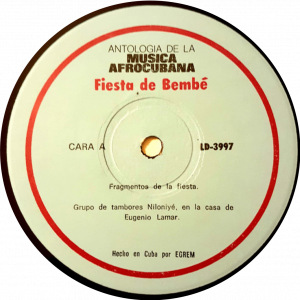 On my first visit, I picked up an album by famous Cuban salsa troupe Los Van Van and had the pleasure of meeting Michel, La Fernandina’s affable owner.  He told me how he started his remarkable collection six years ago with just $30 and a market stall. We spoke for some time about music, books and life, and I vowed to return for a poster. The following evening, I gave Michel a copy of Dostoyevsky’s The Double which I had just finished reading, to add to his collection. He recommended this Afro-Cuban gem and invited us back to his home for coffee, and taking us up onto his roof, showed us his collection of American pre-revolution enamel advertisements of all sizes – a true collector.

Like its previous owner, the record itself is fantastic. With no information online, I set about translating the 500 Spanish words on the back of the sleeve, to discover that it is a field recording of a Yoruba-influenced bembé party; a party for the Santeria saints. Everything about this record feels like a piece of musical anthropology, and its exhilarating.

With lo-fi, warm, hissing extracts from the party on each side, each as continuous recordings, you can feel the energy build and the crowd become more animated. Instruments are occasionally out of time, but this does more to add to than subtract from the atmosphere. As a listener almost forty years later, I felt privileged to experience the waves of layered percussion and chanted vocals.

For the interested, and in part to validate the silly amount of time I spent clumsily running it through Google Translate, I’ve put the full sleeve text below:

The preservation of folklore of African origin, still cultivated in the rural and urban areas of Cuba, is one of the objectives of our cultural policy. Those of Yoruba origin are of greatest importance in the west of the island, where large traces of this African ethnicity were found due to colonisation. Traits of their culture remain alive – most markedly, musical ones.

Yoruba musical culture is intimately linked to religion, performed with batá drums, güiros and bembé drums. Bembé is also the name given to the parties. Although without ritual character, they an extension of the practice of Santeria since all  songs are dedicated to the Yoruba saints by believers. Bembé parties are held for simple recreation or to celebrate the anniversary of the date on which a believer has been initiated, as is the case in this recording.

Bembé drums do not require any ritual in their construction or handling. Construction and handling varies by region, influenced by cultural elements of other African ethnicities. There are three kinds of bembé drum: iyá, obbatá and erún. Generally, they have a cylindrical shape with one leather membrane nailed in, though those iyesá influence have two membranes and tension through cords. They can be made with trunk of palm, avocado, cedar, pine or almond tree, and the leather can be ox, horse or mule.

The drums that perform in the recorded party were built in 1952, from avocado wood and ox leather, with markings of the arará culture. This tension system was replaced by ironwork when the drums were repaired and only the erún retains its original tension. The wood used is avocado trunk. The iyá and the obbatá are made with staves and have three legs, whereas the erún is made of one piece and does not have legs. The bembé set also includes an aggogo bell.

The group of players is made up of seven men, who alternate in playing based on the duration and continuity of the songs. The player of the iyá remains standing, whilst and the players of the erún and the obbatá remain seated. The iyá drum initiates the piece. It is played improvisationally,  usually struck with a stick in the performer’s right hand or struck with the fist of the left hand. In more expressive songs, the edge of the ring that borders the mouth of the drum can also be struck with two sticks. The erún and the obbatá are always struck with two sticks.

The group has a solo singer who has mastered the improvisation in the Yoruba language, and a chorus of eight women that grows as the party builds. Songs have a call-and-response structure, with the choir providing affirmation or repetition to the soloist, who is also called the rooster. The choir dances in a circle in the centre of the room in front of the drums, and the soloist can integrate or can stay out. This choreography varies with general excitement or if possession by a saint begins over a participant. The bembé party is very dynamic and the collective animation crescendos with each song.

The song to Eleggua initiates the bembé, while later the songs to Oyá and Changó are chosen for their expressiveness. In the pauses between these songs,  the climax of the party was achieved and several participants fell into possession of the saints, stimulating the mood of players and singers. Bembé parties are currently held in both the city and in the countryside. The present was held in the city of Matanzas, on Salamanca Street, on March 4, 1981, in the house of Eugenio Lamar. Start time: 8:00 p.m. Finished: 12:00 a.m. The bembé drums and their players are part of the Niloniyé group “Los hijos de Atocha”, led by Eugenio Lamar Delgado “Cucho”.