Mates’ Crates, a series headed up by our friend Andrei Sandu, dives into the tales behind records and digs deeper into our connections to music. These are not reviews, they’re stories. This time, another guest post from Melodic Distraction’s own Snoodman Deejay, cratedigger extraordinaire and boogie virtuoso behind It’s Good For The Soul.

Without his trusty Salsoul Orchestra behind him, Vince Montana Jr. still manages to deliver one of the all time great disco records, living up to his reputation as “the Godfather of Disco.”

You could be mistaken for believing that the success of the Salsoul Orchestra was largely attributable to the sheer skill of musicians such as Earl Young or Norman Harris, and undoubtedly you’d make a convincing case. What this record proves however, was that it was Vince Montana Jr. who was ultimately at the heart of the Salsoul Orchestra’s iconic groove. Indeed it is perhaps no coincidence that after leaving Salsoul in 1978, there was a marked decline in the quality of the records they released. Regardless, Goody Goody was the group that Montana Jr. formed with his daughter Denise and (I believe) the Atlantic records in-house band. Together they released one album, the self titled – Goody Goody in 1978. All the tracks are penned by Montana Jr. and it is one of those rare disco records that absolutely oozes quality throughout. I’m sure most of you will be aware of It Looks Like Love, Montana Jr’s magnificent homage to Chic, with it’s iconic guitar hook and captivating introduction. 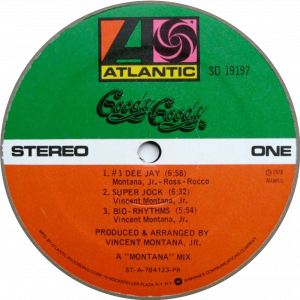 Yet it is the LP’s first track, #1 Dee Jay that I find myself constantly returning to. Killer introduction aside, it’s a classic Montana Jr. production. One can hear the influence of his earlier work with the Salsoul Orchestra (and Gamble & Huff before that) in the first half of the record, which bears hallmarks of classics such as The Salsoul Orchestra – It’s Good For The Soul, particularly in the ways in which the rumbling bass line and conga interweave and interact rhythmically. All the while however, a powerful percussive line bubbles away underneath, and after two vocal verses the intensity grows as the punchy kick suddenly comes to the fore, underpinning a lovely, piercing saxophone hook. Whilst different instruments drop in and out, the record never loses this intensity, largely down to the constant, almost galloping latin percussion, which creates a constant sense of motion and contributes towards the tracks timeless danceability.

For me this track encapsulates all that was great about Vince Montana Jr.’s music. Montana was able to combine and layer a multitude of different instrumentation, whilst all the while never losing sight of that which is so hard to define, but is ultimately crucial to any dance track – the groove. With Goody Goody, Montana shakes off much of the cheesier side of his earlier Salsoul releases (Salsoul Christmas springs to mind) and instead deliver an LP packed to the rafters with driving bass lines, thumping percussion, and gorgeous, lush instrumentation. From “the Godfather of Disco” this is an offer no legitimate disco fan could refuse.

You can catch choice cuts from Snoodman Deejay on It’s Good For The Soul, every first Sunday of the month on Melodic Distraction Radio.