Mates’ Crates, a series headed up by our friend Andrei Sandu, dives into the tales behind records and digs deeper into our connections to music. This time, psychedelic soul from Ohio singer Gloria Ann Taylor.

Gloria Ann Taylor’s “Love Is A Hurtin’ Thing” is one of the most memorable pieces of music I’ve ever heard. Every second of its seven and a half minutes is hauntingly beautiful.

I won’t write much about the music itself as I don’t trust myself to do it justice.  Writers at Pitchfork, Bandcamp and Wax Poetics have tried, so I’ll stick to the story. Taylor is by no means the only soul singer for whom commercial success came decades late, fuelled by the rare groove diggers of the vinyl revival. But her brief career is particularly unique.

Born in West Virginia but raised in Toledo, Ohio, Taylor suffered from rheumatic fever as a child and was not expected to live to adulthood. Whilst she did, she lost her mother as a teen and began singing in clubs to support her own young children. It was here that she was discovered by  James Brown’s promoter, Walter Whisenhunt, who soon became her manager, producer and husband. 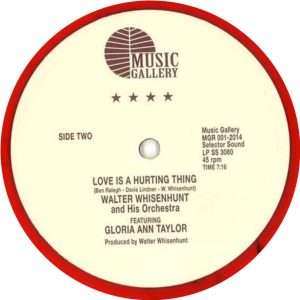 Taylor’s debut single proved to be her biggest contemporary hit. Indeed “You Got To Pay The Price” was nominated for the Female R&B Performance Grammy in 1970, losing out to Aretha Franklin’s “Share Your Love With Me”. Franklin won that category every year between its creation in 1968 and Natalie Cole’s victory in 1976.

Owing to both her exceptional talent and Whisenhunt’s unique production, Taylor’s discography is impressively broad and eclectic. But none of her subsequent releases – not even her funk cover of Dolly Parton’s “Jolene” – matched any initial commercial success. On the subject of Jolene, this video of twin YouTubers hearing it for the first time is wonderfully heartwarming, as is their reaction to Phill Collins.

By 1977, both Taylor’s career and her marriage stalled, and she returned to Toledo and found other work, singing only in church. It was not until 2016 – the year after her earlier music began to be reissued – that she returned to the studio to record three new songs with Estonian multi-instrumentalist Misha Panfilov. Of these, “Be Worthy” is my favourite.