We welcome Mates’ Crates to the Melodic Distraction website. A brand new series headed up by our friend Andrei Sandu, it dives into the tales behind records and digs deeper into our connections to music. These are not reviews, they’re stories. First up, George Benson’s The World Is A Ghetto.

Every few months, London legend Jon Rust hosts a record sale at the Libreria bookshop in E1. As part of the Standard Place crew alongside Oneman, Asbo, Martelo and Reecha, Jon’s been broadcasting on NTS since its first week and was one of the first DJs on Boiler Room (he’s done several since, they’re all fantastic [1] [2] [3]).

A few months ago, I found myself in Libreria while Jon was hosting a sale alongside singer-songwriter Andrew Ashong, who was selling off some of his own collection. I’ll admit I hadn’t heard of Andrew before meeting him there, but his personal warmth and wisdom is reflected in the beautiful range of music he produces – particular favourites are Love The Way and Flowers (with Theo Parrish).

Flicking through Andrew’s crates while talking to him about how Romanian is the modern language closest to the original Latin (some trivia he’d already picked up from an Uber driver a week previous), I pull out George Benson’s Give Me The Night. Andrew is appalled that I’m so excited by Benson’s hit single but have never heard the B-Side. He snatches it from me and runs to the turntable on the other side of the room. 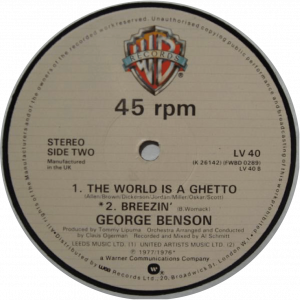 Moments later, the opening string chords of The World is a Ghetto fill Libreria. Damn. Benson’s 1980 cover of this 1973 song by War (of Low Rider fame) is the most beautiful record I’ve heard all year. Its the perfect fusion of upbeat funk and sultry jazz, while Benson’s vocals seem to resonate without saying too much at all:

Walkin’ down the street, smoggy-eyed; looking at the sky, starry-eyed;
Searchin’ for the place, weary-eyed; crying in the night, teary-eyed.
Don’t you know that it’s true, that for me and for you, the world is a ghetto.

I’d not heard poetry that clean since Pitbull rhymed Kodak with Kodak. I’m by no means the first to recognise the near-perfection – it turns out The World is a Ghetto has been sampled more than a few times. In house, Bob Sinclar’s The Ghetto draws heavily on Benson’s keyboard and bass guitar, while Thomas Bangalter (one half of Daft Punk) twists three to five seconds of Benson’s hook into oblivion on Spinal Scratch. In R&B, Benson’s opening strings feature throughout Big Pun and Fat Joe’s Glamour Lifewhile Destiny’s Child’s Get on the Bus draws heavily on Benson’s guitar. In hip-hop, Kanye West’s Beat 1 from 1997 – when Yeezy had just begun breaking through the industry as a producer – masterfully samples a variety of elements.

I have few words that seem to do The World is a Ghetto justice, so I’m not going to try. But I don’t need to try, this masterpiece speaks for itself.