Mates’ Crates, a series headed up by our friend Andrei Sandu, dives into the tales behind records and digs deeper into our connections to music. As summer draws to a close, it felt right to pick “Keep Smilin'” by seminal Hungarian guitarist Gábor Szabó.

As one of my favourite guitarists, I was surprised to discover that I haven’t written about Szabó on the column yet.

Born in Budapest in 1936, he moved to the US after the 1956 Uprising. Initiated by university students in protest against the USSR’s influence, the Soviet Army’s response killed 2,5000 Hungarians and compelled hundreds of thousands to seek political refuge abroad.

Having played the guitar since the age of 14, Szabó later attended the Berklee College of Music in Boston and performed in several groups. His first solo album featured “Gypsy Queen“, which later became a hit for Carlos Santana (who speaks extensively about him in this interview).

Not dissimilarly, George Benson’s 1976 version of “Breezin’” enjoyed significantly more commercial success than Szabó’s own performance of the song, which he recorded in partnership with songwriter Bobby Womack. It seems the relationship got a little “Stormy“, as Szabó complained about Benson’s success whilst Benson accused Szabó of failing to appreciate the song. 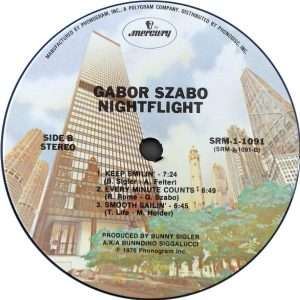 The year 1976 also brought the release of Szabó’s “Nightflight”, from which “Keep Smilin'” became the biggest hit of his career. Much of the album was written and arranged by Bunny Sigler, who also worked with Double Exposure and First Choice. In fact, Sigler had released a version of “Keep Smilin'” a few years earlier, produced by the legendary Norman Harris of MFSB. Szabo’s turn to go big with a cover.

Unlike the original, the cover also interpolated lyrics from William DeVaughn’s “Be Thankful For What You Got” (itself covered countless times, including by The Intruders. Regular readers won’t be surprised that I’m loving these musical connections, and also discovered that “Keep Smilin'” co-writer Alan Felder performed background vocals on Eddie Kendricks’ “Goin’ Up In Smoke”.

Despite scoring his greatest commercial success with a cover, I consider Szabo one of the era’s most original guitarists, blending jazz, rock, Hungarian and later Indian influences into his unique work. We’re incredibly fortunate for the pace at which he released music, as he passed away in 1982 aged just 45.

Keep smilin’, or as Google Translate tells me that they say in Hungary, mosolyogj.