Mates’ Crates, a series headed up by our friend Andrei Sandu, dives into the tales behind records and digs deeper into our connections to music. This time, British jazz-funk group Freeez with “Southern Freeez”.

Sometimes you don’t know you wanted something until after you’ve got it. I’d heard “Southern Freeez” countless times, but only after picking it up in a charity shop did I appreciate it as a classic example of UK jazz-funk.

Formed in 1978 in North London by producer John Rocca, I was surprised to discover that “Southern Freeez” was named after a dance move popular at Southgage’s “Royalty” club, not far from where I grew up. Whenever Rodney Franklin’s “The Groove” was played, the crowd would freeze at particular moments.

As with every clip of long-running music show Top of the Pops, I found it surreal to watch Freeez lip-syncing Southern Freeez on the program. I then read that the BBC explicitly avoided live performances so that audiences could hear exactly what the records would sound like before buying them. Which sort of makes sense? 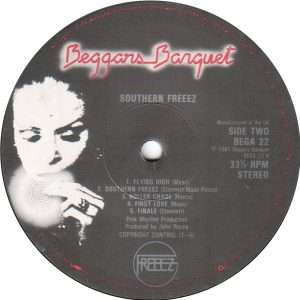 Freeez later had an international hit with “IOU“, which was remixed by iconic New York DJ John “Jellybean” Benitez (producer of Madonna’s “Holiday” and Whitney’s “Love Will Save The Day”). But their success spans far beyond these two records. Members disbanded and regrouped in several forms over the course of over two decades.

Rocca and keyboardist Andy Stennett recorded as Pink Rhythm in 1985. Guitarist Jean-Paul Maunick played with Light of the World in 1979, before forming Incognito, best known for “Always There” featuring  Jocelyn Brown. Perhaps most surprising, Rocca later worked with trance DJ Paul Oakenfold as part of the balearic beat group Electra.

“Southern Freeez” has been covered several times, including by Beverly Knight and by Giles Peterson’s band Sonzeira. It seems no good story about the UK scene is complete without Peterson, who has also recently released an album with Jean-Paul Maunick.

I’ve only explored a small part of the rabbit hole around this bunch of musicians, but I’ll leave it there for now. As the days get colder, grab a hot drink and warm up with Freeez.