Mates’ Crates, a new series headed up by our friend Andrei Sandu, dives into the tales behind records and digs deeper into our connections to music. These are not reviews, they’re stories. This time, Fat Larry’s Band’s Act Like You Know.

Like many who weren’t around in the early eighties, I first discovered this funky scorcher on Grand Theft Auto Vice City’s Fever 105.

Formed in 1976 by drummer and vocalist “Fat” Larry James, Fat Larry’s Band are best known for Act Like You Know and Zoom. Tragically, the band performed for just five more years after the release of their two biggest hits, folding after James had a heart attack in 1987.

Nonetheless, Act Like You Know surely cemented their legacy. Two things about the record are noteworthy, and both are heavily represented in the track’s YouTube comments. The first is that irresistible baseline, and the second is quite how many listeners, myself included, were introduced to it by Grand Theft Auto: Vice City. Taking each in turn. 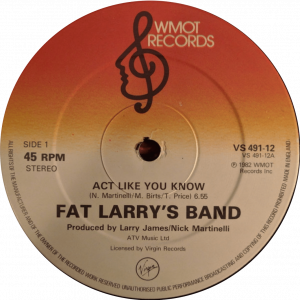 I was really surprised to discover that Fat Larry’s iconic bassline is itself actually a sample of a boogie record called Help is On The Way, released a year earlier by The Whatnauts. By extension, all the times I’ve heard that bassline sampled – by De La Soul, Beverly Knight and even Little Mix– actually owe very little to Fat Larry.

Indeed, it seems The Whatnauts are no strangers to being sampled. Kanye West samples their I’ll Erase Away Your Pain on his Late, and their She’s Gone To Another on his Last Call. Wu Tang’s RZA sampled Message From A Black Man on You Can’t Stop Me Now. A Tribe Called Quest sampled Why Can’t People Be Colours Too? on Oh My God. But enough about them.

YouTube is always awash with dopes desperately seeking validation with comments like “[] brought me here” and “listening in 2019”, but these comments can be surprisingly telling. If Hobsido hadn’t been brought here by Vice City, would s/he and the other 1.1k likes on that comment be listening in 2019, or have ever heard the track at all? Cultural media have expanded beyond recognition since 1982, and every video game or vlogger that introduces a new generation to fantastic music is something to be cherished.

The Grand Theft Auto series’ in-game radio stations pioneered the idea that a video game could play this role. Vice City took this more seriously than ever before, with the seven stations released as a CD-boxset alongside the game itself. Fever 105 has always been my favourite Vice City station, whose fictional host – Oliver “Ladykiller” Biscuit – was modelled on the legendary Barry White.

Vice City sold over 18 million copies. In so doing, Fever 105 probably introduced literally millions of players to iconic tracks like Rick James’ Ghetto Life, Mtume’s Juicy Fruit, Oliver Cheatham’s Get Down Saturday Night, and The Pointer Sisters’ Automatic. Craig Connors, Rockstar’s former Music Director who oversaw the soundtrack of every game in the series so far, has given some interesting interviews on the process.

I don’t want to suggest that what I’m putting together is in any way profound, but I love how exploring the makeup of a single record can lead down rabbit holes as diverse as RZA, Beverly Knight, and the role of new media in promoting older music. I love the tangibility of vinyl, but who am I to deride video games, Spotify’s algorithmically-generated playlists or, dare I say it, Little Mix, if they’re helping sustain music history.