Mates’ Crates, a series headed up by our friend Andrei Sandu, dives into the tales behind records and digs deeper into our connections to music. This time, we remember French disco producer Don Ray.

Two years ago today, the world lost one of its most underrated disco producers. Whether working with other musicians (notably Cerrone, including playing keyboard on “Love in C Minor”), or on his own releases, Raymond Donnez (often credited under his pseudonym, Don Ray) is a cult hero of Euro disco.

Whilst “Standing in the Rain” is my favourite Don Ray track, his biggest crossover hit was actually his single “Got To Have Loving“, which received widespread airplay on pop radio after peaking at #44 in the Billboard Hot 100 in October 1978. I discovered both via Jamie xx’s Reykjavik Boiler Room, which I fondly remember listening to on a flight to Italy. In fact, the whole album – his only solo release – is fantastic. 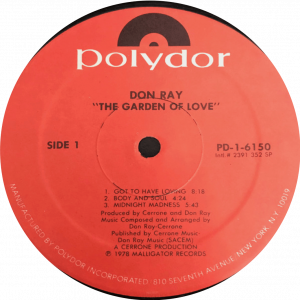 And Don Ray’s talents were not restricted to disco, having also worked with jazz-funk musician Alec Constandinos and – perhaps more surprisingly, conducted Monaco’s Eurovison performances in 1974 and 1976, then France’s winning entry in 1977. Donnez also produced Santa Esmeralda’s cover of Nina Simone’s “Don’t Let Me Be Misunderstood” which (like “Lonely Shepherd” by Gheorge Zamfir) was used on the soundtrack for Quentin Tarantino’s 2003 film “Kill Bill”.

And, unfortunately, that seems to be all that there is to find on Donnez, which leaves you even more time to listen through his discography.