Mates’ Crates, a series headed up by our friend Andrei Sandu, dives into the tales behind records and digs deeper into our connections to music. This time, a classic from LA group Creative Source.

Just before I went to pay at Phonica Records in Soho (brick and mortar record shops – remember them?), a bright green 7″ with the Northern Soul fist on the centre label caught my eye. To my delight, it was Creative Source’s “You Can’t Hide Love”.

If you’re a soul enthusiast, I know you know this one. If you were out in clubs that play house around 2016/2017 (brick and mortar clubs – remember them?), you’ll probably have heard it heavily sampled on Qubiko’s “Disco Connection”. But if this is the first time your ears have been graced by this slice of solid gold, soulful R&B, enjoy.

As ever, I’m not the only one to recognise the song’s brilliance, with Dionne Warwick, D’Angelo and – most famously – Earth, Wind and Fire all recording covers, with the latter peaking 38 chart places higher than the original. Earth Wind and Fire’s version has also been more notably sampled, including by Rick Ross for 2018’s remake of the seminal 1972 blaxploitation film “Superfly”, originally soundtracked by Curtis Mayfield. 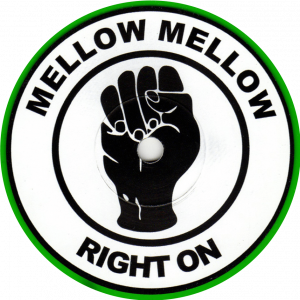 Formed in 1972 in LA, Creative Source put out an impressive four albums in three years before disbanding in 1977 after losing their contract. As well as this track, they also recorded an incredible – and slightly psychedelic – twelve minute cover of Bill Withers’ “Who Is He, And What Is He To You” which I played on last month’s Mates’ Crates show. My love for Withers’ original (and playing out Henrik Schwarz’s remix) knows no bounds, so Creative Source’s twist was welcome.

The cover isn’t the band’s only connection to Withers. Five years after penning “You Can’t Hide Love”, songwriter Skip Scarborough wrote Withers’ seminal “Lovely Day” (in which the eighteen-second sustained note is one of the longest ever recorded on an American pop song).

And after that whole web of music, we haven’t even talked about the B-Side of this repress. The Mellow Mellow Right On label has repressed ten colourful Northern Soul 7″s, including Otis Clay’s “The Only Way Is Up” and Garfield Flemming’s “Please Don’t Send Me Away”. (I’ll never tire of sharing this video of Flemming himself stumbling upon his own music played at a Paris flea market).

On the flipside of my record is “Maybe So, Maybe No” by The Holidays, best known for their 1966 song “I’ll Love You Forever” featuring Edwin Starr of “War” fame. When The Holidays’ vocal harmonies kick in, you can hear why the elusive people behind the label paired this lovely sixties soul track with “You Can’t Hide Love”.

All in all, a wonderful collection of beautiful music. Mellow Mellow, Right On.