Mates’ Crates, a series headed up by our friend Andrei Sandu, dives into the tales behind records and digs deeper into our connections to music. More disco to kick start the autumn, with Chanson’s “Magic Carpet Ride”.

When I found this 7″ in a bargain bucket, I picked it up without even knowing the legacy carried by its musicians.

If you’re into your soul, and even if you’re not, you’ve heard James Jamerson, even if you don’t know it. Uncredited by Motown and receiving little formal recognition, he remained anonymous even most of the bassists who emulated his style in the early 1970s – Paul McCartney amongst them. As is unfortunately far too often the case, the recognition came posthumously, inducted into the Rock and Roll Hall of Fame seventeen years after his death, and listed as the most influential bass guitarist of all time seventeen years after that.

If you list famous soul hits, there’s a good chance Jamerson played on them and – as a prolific improviser – wrote part of them. The Supremes’ “You Can’t Hurry Love”; The Temptations’ “My Girl”; Marvin Gaye’s “I Heard It Through The Grapevine”; The Four Tops’ “I’ll Be There”;  Jackie Wilson’s “Higher and Higher”; Gladys Knight’s “Neither One of Us”; I could go on for hours. Playing on nearly every Motown recording between 1963 and 1968, Jamerson performed on 23 number-one pop hits, a record narrowly surpassed only by Paul McCartney. 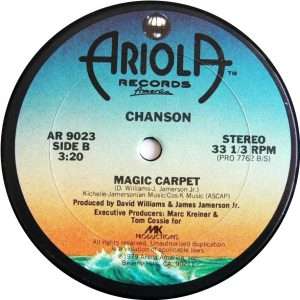 Long troubled by alcoholism, Jamerson allegedly played the iconic bassline of Marvin Gaye’s “What’s Going On” while lying flat on his back, as he was too intoxicated to stand upright. He sadly died of cirrhosis in 1983, aged 47. So unrecognised was Jamerson during his lifetime that it was only last Friday (August 27th 2021) that his resting place was given a proper headstone, following a crowdfunding project by his family.

He was survived by four children, amongst them James Jamerson Jr., who became a celebrated session musician in his own right, playing with Janet Jackson, Aretha Franklin and Bob Dylan. In the late 1970s, James Jr. formed the disco group Chanson with guitarist David Williams (who later played for the likes of Madonna and Michael Jackson – most famously,y the solo on “Billie Jean”). Their only hit – “Don’t Hold Back” – charted at number 21 in 1979. “Magic Carpet Ride” somehow slipped under the radar. The bassline on both is neat, and now I know why.