Mates’ Crates, a series headed up by our friend Andrei Sandu, dives into the tales behind records and digs deeper into our connections to music. These are not reviews, they’re stories. Back on the disco classics this time with Cerrone’s “Give Me Love”

Possibly my favourite hit from the pioneering French disco don.

Ask most disco fans to name an influential producer and they’ll probably name either Giorgio Moroder (behind Donna Summer’s seminal “I Feel Love”, or Marc Cerrone, producer of this column’s pick. (Fewer will name Patrick Cowley – an oversight I tried to set right in this piece a few years ago).

Perhaps Cerrone’s best known records are “Love in C Minor” and the sci-fi themed “Supernature” (the A-side to my copy of “Give Me Love”), broadcast all over the UK as the theme for The Kenny Everett Video Show.  It also featured on GTA IV’s K109 disco station. Cerrone’s “Hooked On You”, with vocals by Jocelyn Brown (of “Somebody Else’s Guy” fame) is spectacular. Cerrone also produced several hits for fellow French musician Don Ray, including “Standing In The Rain” and “Got To Have Loving“. 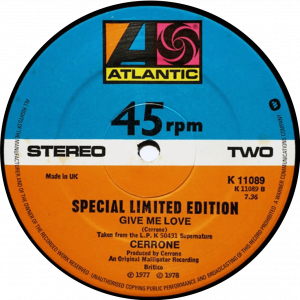 I have personal stories which spring to mind when I hear many of these Cerrone productions (not the rock opera…). I remember hearing “Supernature” in a set by Skream almost ten years ago when I was just getting into disco (I’m not sure how or why one of the founding fathers of dubstep played such a big part of introducing me to the genre either…). We played “Hooked on You” at our Risko Disco boat party last summer. Most warmly of all though, I remember “Give Me Love” from the first (and unfortunately, only) time I played out with the Melodic Distraction crew on a Saturday afternoon at Buyers’ Club in Liverpool.

Frankie Knuckles – godfather of House, whose remixes of Womack & Womack’s “Missin’ Persons Bureau” I wrote about last month – blessed “Give Me Love” with a futuristic remix too.