Mates’ Crates, a series headed up by our friend Andrei Sandu, dives into the tales behind records and digs deeper into our connections to music. These are not reviews, they’re stories. This time, a Pride anthem with Carl Bean’s “I Was Born This Way”.

June is Pride month, so it felt right to pick this Pride anthem from my collection. Born This Way was one of the first gay disco songs written specifically for the Gay community; an instant hit predating the Village People. First released in 1975 by Valentino, it is Carl Bean’s iconic 1977 version which I bought on sight in Phonica last summer.

Growing up in Baltimore, Bean was closely involved in the social justice and civil rights movement.  After moving to New York to form a gospel group with other gay singers, Bean was quickly drawn to “message music” – less boy-meets-girl love song, more civil rights, sit ins and anti-war songs. 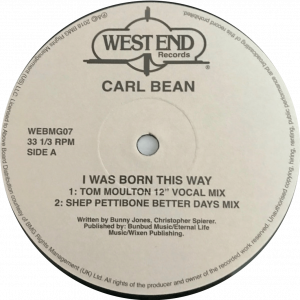 After eventually signing to Motown, “I Was Born This Way” gave Bean a long-awaited opportunity to be proud and open about his race and his sexuality. For many, it was the first time they could hear music that reflected their own lives, and the record became an instant success, though Bean is still surprised at its lasting impact.

By the time the record had a renaissance in the 1980s, Bean was an AIDS campaigner and had joined the clergy, founding a protestant denomination particularly welcoming of gay, lesbian and bisexual African Americans. Earning a thousand dollars for each show show, these performances gave Bean the funds he needed to continue his activist work.

The record’s message spread across communities, becoming a more general encouragement to follow your dreams. Lady Gaga’s 2011 chart hit of the same name was inspired by hearing Bean’s record. It has also become something of an iconic sample, on Earth People’s “Dance” in 1989, and Ditongo’s “Longo” in 2015, amongst others. Much to my delight, the West End Records repress features versions by Tom Moulton, Larry Levan and Shep Pettibone, including his standout Better Days mix.

Now in his seventies and retired from ministry, Bean is considering recording music again, as driven by today’s activist movements as he was by those in the sixties. Music is an undying force for change, and past headway in the push for equality is an important reminder to keep pushing.