Mates’ Crates, a series headed up by our friend Andrei Sandu, dives into the tales behind records and digs deeper into our connections to music. To kick off the new year, a New York funk classic from B.T. Express.

As is often the case with the best finds, I came across this B.T. Express record the long way…

In the halcyon days of my student DJing, one of the tracks which never failed me was Antoine Clamaran’s “Do The Funk”, an effective if formulaic slice of  French house which always turned up the heat with the university crowd.

As with many such records, it essentially revolves around applying a high-pass filter to a funk / soul / disco sample. In this case, that sample was B.T. Express’s “Does It Feel Good To You” (also sampled by Phats and Small of “Turn Around” fame). B.T. Express were then front of mind when I found their “Energy To Burn” album the next time I went digging.

That same trip, at Sonic Import in Nice, I found Smokey Robinson’s “Being With You” and Timmy Thomas’ “Why Can’t We Live Together” (later sampled on Drake’s “Hotline Bling”) – click through to read about both of those.

As well as its gatefold sleeve with a weird horoscope-style description of each member of the band, “Energy To Burn” had me hooked on the B.T. Express sound. As well as the album’s title track, I love their cover of The O’Jays’ “Now That We Found Love” (also covered by disco-reggae group Third World). 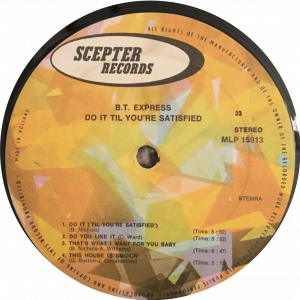 I bought B.T. Express’ debut album “Do It ‘Til You’re Satisfied” soon after, on which the title track is the clear standout – a formative example of the Brooklyn sound. B.T. Express was formed in the early seventies from three members of The King Davis House Rockers, a Brooklyn dance band which had previously released a few obscure singles.

Equally seminal is the fact that legendary disco producer Tom Moulton – inventor of the remix and the 12′ single – credits his version of “Do It ‘Til You’re Satisfied” as his first successful remix.

Moulton’s Red Bull Music Academy lecture is mandatory viewing for disco enthusiasts, and he speaks about the track 27 minutes in. B.T. Express hated his version, but claimed they’d always intended to record it that way when Moulton’s mix reached Number 1 and was performed on Soul Train.

Less directly relevant, but no less interesting, B.T. Express’ keyboardist, Michael Jones, changed his name to Kashif after joining the Nation of Islam, and left the band in 1978 to pursue a solo career. As well as releasing his own music, he played on records by the likes of George Benson and Whitney Houston; wrote and produced for the likes of Evelyn “Champagne” King (including her 1982 hit “Love Comedown“). He also produced the theme for the 2000 Paralympics, hosted in Sydney.

Without trying to get too faux-profound, I’m ever-amazed by the way in which music can take us from where this column started to where it ended. I hope you enjoyed the journey.