Mates’ Crates, a series headed up by our friend Andrei Sandu, dives into the tales behind records and digs deeper into our connections to music. This time, disco-jazz fusion from Indian icon Asha Puthli with “Space Talk”.

Few records can claim to have been beamed into outer space.

In 2009, Asha Puthli’s 1976 genre-bending “Space Talk” was transmitted beyond our planet by the Goonhilly Satellite Station in Cornwall in 2009 to mark the 40th anniversary of Apollo 11. Of all the tracks we could choose to represent our civilisation to alien life forms, it’s not a bad pick.

Puthli’s story is a fascinating one. Her Red Bull Music Academy lecture is definitely worth a listen in full, but I’ll try to keep it brief.

Born into a Hindu family in Bombay in 1945, she attended an English-speaking Catholic school.  As she began training in Indian classical music and opera, she listened to jazz and pop radio, sowing the seeds for a career defying genre boundaries.

After a stint as a British Airways flight attendant, Puthli moved to New York to undertake a scholarship with Martha Graham (later voted TIME’s dancer of the century for reshaping American dance). She soon stepped back from dance to focus on her music.

After favourable reviews for her vocals on records by Peter Ivers Blues Band and avant-garde saxophonist Ornette Coleman, Puthli released her eclectic self-titled debut album in 1973. Her mellow cover of Bill Withers’ “Let Me In Your Life” is a particular favourite. 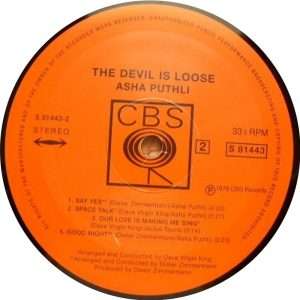 Puthli had already built popularity in Europe and begun to rub shoulders with British stars of the era.  The album’s producer, Del Newman, had regularly collaborated with Elton John, and the cover was shot by Mick Rock, ‘The Man Who Shot The Seventies’ in his capacity as Bowie’s official photographer.

It wasn’t long before she became a familiar face at Studio 54, where she later headlined a fundraiser for a ballet company. Alongside her talent for music and dance, Puthli stared in several films and was known for her fashion sense. The New York Times put it best when recognising her as a ‘fusion pioneer’, in every sense.

Unsurprisingly, “Space Talk” itself quickly became popular at David Mancuso’s Loft and was later sampled by the likes of The Notorious B.I.G. and The Pharcyde.

Puthli isn’t the only fantastic example of cross-cultural disco fusion from India. The the story behind Rupa’s “Aaj Shanibar” is worth a read, and I’ve played Bappi Lahiri’s “Come Closer” on the Mates’ Crates Show.

I’m also a big fan of several tracks by Asha Bhosle, including “Udi Baba” and “Main Akeli Raat Jawan” (though perhaps that’s statistically inevitable given that Bhosle holds the world record for the most studio recordings.

But – as far as I’m aware – none of their music has been beamed into space.