Mates’ Crates, a series headed up by our friend Andrei Sandu, dives into the tales behind records and digs deeper into our connections to music. These are not reviews, they’re stories. This time,  Aretha Franklin’s Get It Right.

Where to begin? Through quite unlikely means, this is the record that got me into disco.

The year was 2012 and my tastes ran as deep as slightly pre-international-fame Disclosure. Skream had moved on from dubstep and his year of flirting with disco had just begun.  Making sure that every passer-by in the sixth form common room could see you were streaming Boiler Room was the only way to spend a free period. All that brought me to this Skream b2b Disclosure set, which opens with Aretha’s Get It Right. There’s still a lot of shaming around admitting that ‘mainstream’ acts pointed you towards deepening your interest in music, and I don’t really understand that… 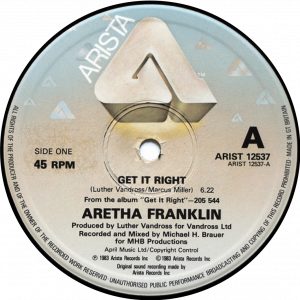 Two years later, I bought the record – one of my first. Written by the inimitable Luther Vandross, both the instrumentation and the vocals are phenomenal. Much like its B-side, Jump to It, Vandross’ influence is felt throughout, but I’m far more positive about that than Don Shewey was in this scathing 1983 Rolling Stone review….

Brazilian session musician Paulinho da Costa features on percussion, which explains why those opening drums are quite so enthralling. One of the most recorded musicians of all time, this man has worked with everyone. Seriously, look him up. Once you know to listen out for it, that percussion is impossible to ignore. In the break with the backing vocals, the percussions really shines and gives the track real depth. Vandross himself performed on backing vocals, though the female voices dominate.

The driving bassline is a stand out feature, but it’s impossible not to mention that the lyrics are just wholesomely motivational. Suddenly the day ahead doesn’t seem quite so daunting. I’d never ruin it for myself by setting it as my alarm, but I brushed my teeth to this record every morning for about six months.

I’ve often thought that I’m not against the idea of a tattoo, just too indecisive to commit to inking any one thing forever.  Get It Right opens with “Alright gang let’s start from number one, let’s throw down till it’s done”. Are those lines the solution to my ink dilemma? Absolutely not. Can you imagine.