Brought to you by record collector and DJ Grace George, Label of Love is a series that tells short histories of music labels & their legacies. Inspired by recent Covid-19 chaos & unjust discrimination, a brilliant NTS show from Yu Su & a severe lack of knowledge, for the next 4 weeks we look at Chinese music labels starting with Modern Sky.

Launched in 1997 by Shen Li Hui in Beijing to release his own & friends music, Modern Sky has grown extensively over the years & now describes itself as the “largest music-indie label in China” with offices in the UK & USA, a massive online streaming platform & international festival programme.

One can barely scratch the surface of a culture as intricate and vast as China’s, the inventor of gun-power, paper, compasses and printing many moons ago but we’ll attempt an extremely brief overview.

The earliest evidence of musical traditions in China date back 5,000 years, with some instruments such as bone flutes unique to Chinese & Asian cultures dated to archaeological sites 8,000 years old. Some of the first & most prominent philosophers Confucius & Lao-tzu (6th-4th centuries BCE) & schools of Buddhist thought emphasised the moral value of music. Xunzi, a follower of Confucian thought, writing in the third century BCE regarded music as essential for a harmonious society:

Fast forward to the early 20th century, the end of the Qing dynasty in 1912 and the start of The Republic of China. Folk music played in ensembles or large orchestras and regional Operas were the most popular forms of musical performance in Chinese culture. During & after World War II & the Chinese Civil War (1927 – 1949) as the power of the Communist Party grew and eventually expanded to complete political control, music was utilised as a tool of the revolution, educating the largely illiterate population with nationalist agendas. Eventually song became a weapon of control for the regime, with anti-revolutionary music banned & song unrelated to Communism deemed as superstitious & dangerous.

Members of a commune in Jiangsu Province taking part in a rally in 1974 criticising the philosopher Confucius.Chairman Mao came to lead the Communist party from 1945 till his death in ’76 and under his rule Maoists deemed Chinese popular music as “yellow music,” loosely translating to “pornography” – aka unfit for society.

The Cultural Revolution of 1966 – 76 enhanced the Communist Party’s onslaught on modernity & intellectualism, causing millions of deaths across the country at the hands of the regime. A small example of the suffering is the story of the Shanghai Conservatory. It had the first orchestra in Asia & over 500 pianos, all of which were destroyed during the decade of terror, whilst many of its staff arrested, tortured, murdered or driven to suicide.

With the Cultural Revolution over & Mao dead, a new generation of Chinese youths were growing up in the 1980s without the first-hand horrors witnessed by their parents. Rock, punk and DIY music culture in China was seeping through the cracks of Communist constrictions in the late 80s. The ‘Nothing to My Name’ anthem that accompanied the ill-fated pro-democracy Tiananmen Square takeover was written by the founder of Chinese rock’n’roll Cui Jian, setting the scene for labels like Modern Sky. However, the trauma of Tiananmen and continued censorship of the Communist party may mean rock & punk is less dissident & more innovative in China today, as bands & labels navigate a permitted territory of creative license without risking political offence and detainment.

Today, Modern Sky is one of the big guns in Chinese indie music with its nationwide festival programme, artist agency, successful sub-labels, international offices & China’s first pan-entertainment membership platform. However, the Chinese music world is a difficult market with MS’ releases often losing money. Founder Shen Li hui is able to continue putting out music in a piracy-rich market & running events thanks to corporate sponsorship of his festival programmes, though Government censoring of every single lyric on albums & songs planned for a performance can mean approval for releases can take months. This hasn’t prevented Shen’s positivity & wide artistic programme from growing even under censorship:

Modern Sky is a diverse label none the less with commercial rock, avant-garde ambient & contemporary Chinese folk scattered throughout its extensive roster, a lot of which is available on Spotify for your listening pleasure, the sky is the limit… 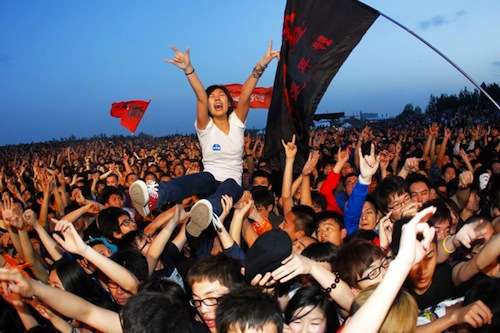 Chinese alt rock group Booji’s only release is a mish mash of psychedelica, punk & experimental electronics. Available to listen in full on Spotify.

As with all our research, this is based on interpretation of sources & personal opinion. We welcome any corrections or suggestions.