Brought to you by record collector and DJ Grace George, Label of Love is a series that tells short histories of music labels & their legacies. For this week’s Label of Love, we’ll be taking a look at Black Swan Records, arguably the first African-American owned music label, releasing jazz, blues & classical records made by black musicians in 1920’s New York & founded by innovative black businessman Harry Pace.

Whilst Black Swan Records’ legacy is eternal, sadly its lifetime was short. At the time of its founding in 1921 Harlem, New York, America was not only recovering from WW1, but also in its second year of Prohibition (the 13 year ban on the production, trade & consumption of alcohol), and the enslavement of black people had only been abolished 56 years prior in 1865. Slavery may have been formally abolished but segregation (also known as Jim Crow) of black & white people reigned strong, embedded into the foundation & mindset of the American people, continuing well into the 1960’s with its own ugly legacy rearing its monstrous head in recent times. Pace founded Black Swan Records in a racist & hostile environment that enjoyed the spoils of black people & their work but gave nothing in return; an environment which many today would argue hasn’t changed since the time of slavery & Jim Crow.

Slavery, segregation, poverty, discrimination & inequality; the black citizens of America suffered hugely and continue to do so. However, severe hardship often leads to great innovation as with the case of Harry Pace & his Black Swan Records. Born in Covington, Georgia on January 6 1884, Harry Pace graduated top of his class from Atlanta University after studying under the instruction of Black Rights activist, socialist & author W.E.B. Du Bois. During Du Bois’ tenure at Atlanta University, he had written his groundbreaking work on racial inequality in America The Souls of Black Folk “a collection of poignant essays on race, labor, and culture.” Published in 1903, the book analysed a post-slavery America where whites & blacks were divided by a racist colour line Du Bois titled the “veil,” which prevented black individuals progressing to their “true potential.”

Du Bois and fellow black intellect Booker T. Washington both “agreed that black owned businesses should be a major hallmark of any plan to achieve civil rights…The burgeoning recording industry seemed an ideal laboratory to test the potency of black entrepreneurialism… previous depictions of black musicians had perpetuated ideas of racial inferiority, the development of a new medium allowed for the chance to replace the old stereotypes with depictions that better reflected… positive attributes” (Tully). 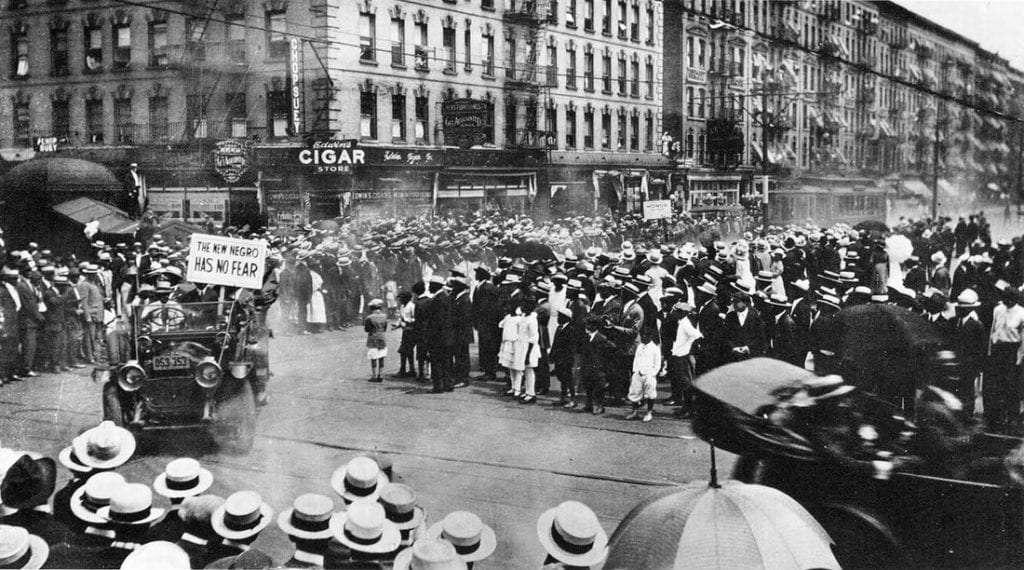 After graduating from Atlanta, Pace took up positions teaching Latin & Greek and as a writer for Du Bois’ Memphis magazine The Moon (amongst other careers, see Tully’s article for a timeline). He went on to form the Pace and Handy Music company in 1912 with friend and fellow songwriter W.C. Handy after meeting whilst Pace worked as a bank cashier. After some commercial success, they would leave for New York with the intention of working in the popular sheet-music trade, but with the growing commercialisation of the music industry, tides turned and instead Pace went solo, founding the Pace Phonograph Corporation Inc. in 1920 with a $30,000 loan and in 1921 Black Swan Records was hatched.

Black Swan Records was named after Elizabeth Taylor Greenfield, a former slave born in 1819, Mississippi. Greenfield was freed by her Quaker mistress but remained in her servitude singing for guests, eventually becoming independent & making a living throughout America & Europe, earning herself the nickname of the “Black Swan.” The Black Swan label proudly advertised itself as “the only records made & controlled exclusively by Negroes.” The label’s aspiration was to uplift African Americans by taking ownership of their music & being a proud example of a successful black-owned business. 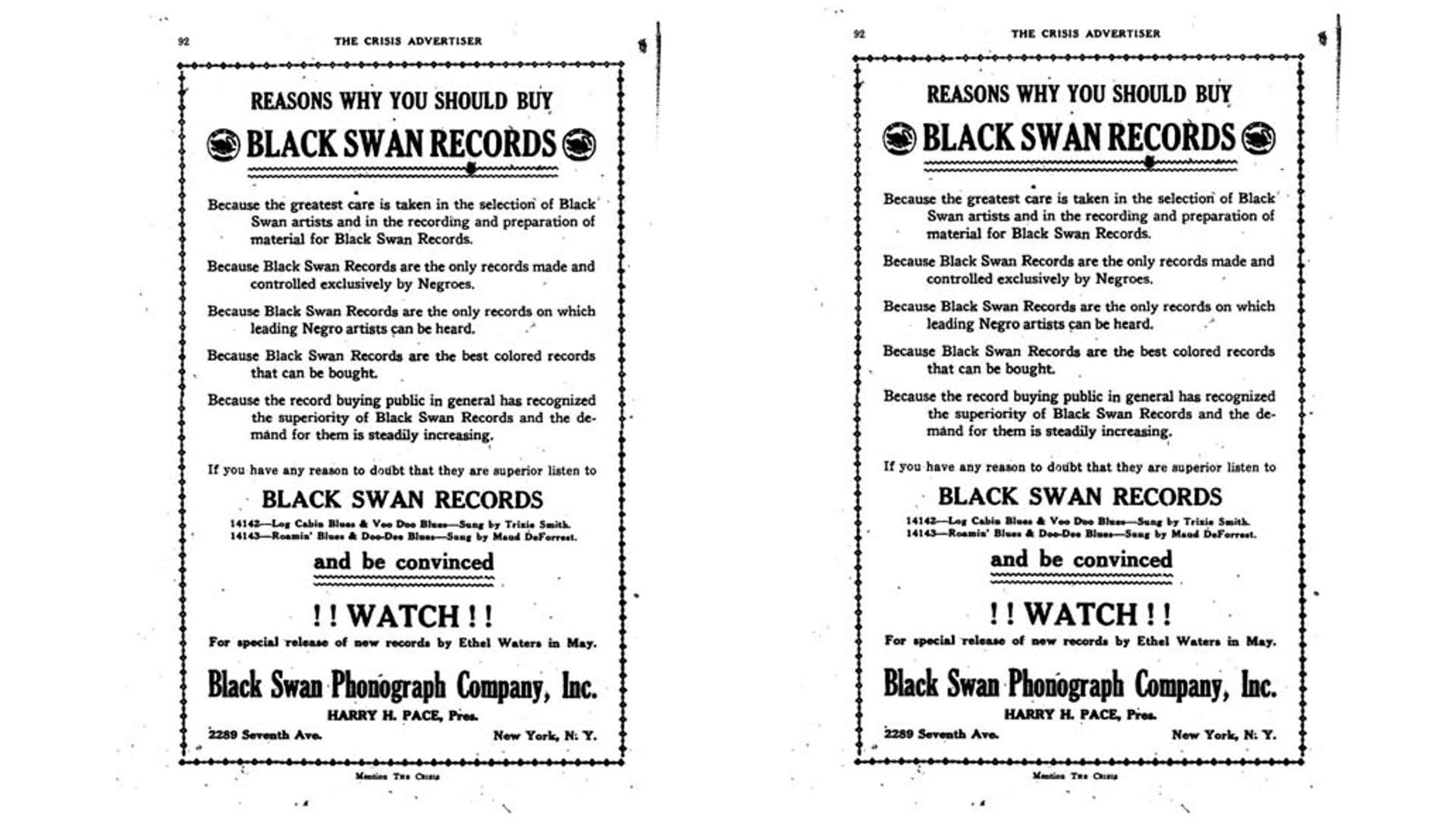 Pace’s mentor Du Bois used his involvement with the NAACP (National Association of the Advancement of Coloured Peoples, founded 1909) to drum up support for Black Swan & recording began early in 1921 out of Pace’s Harlem basement. All employees were black & nearly all Black Swan’s performers too (however, David Suisman argues that many of Black Swan’s artists were white releasing under a black alias). The excellent analysis of Pace’s label & its place in African-American history written by David Suisman, argues that the lack of recent research into Black Swan Records is revealing of a deeper discrimination in scholarly thought & has lead Pace’s progressive work to be unfairly overlooked:

Black Swan Records, then, was a radical experiment in the political economy of African American culture in the guise of musical entertainment and small-business development. Its distinct but connected priorities–music and business–were at once practical and symbolic, designed to effect real change in African Americans’ condition in the United States. The diversity and quality of its musical products would uplift and empower African Americans, as well as challenge (white) public opinion about African Americans’ qualities and capabilities. Its business aims brought together many competing strains of African American political activism to form a solid consensus on black economic self-determination.

During its time, one of Black Swan’s success stories was Ethel Waters, a jazz & blues singer whom Pace met on the New York club circuit. Waters would become the front-woman & most recognisable star on the Black Swan Records nation tour of 1922. Despite the speedy successes Pace & his artists saw, profits were redirected to pay off investors & the costly delays of the relatively new business of record pressing were excessive. Racial inequality not only created daily frustrations but barriers to business too, as Pace was unable to find a pressing plant closer to home in New York who would work with a black man.

Despite a promising pressing deal with a businessman named John Fletcher leading to the purchase of a Long Island pressing plant, Pace’s initial success began to wane in 1922. Black Swan Records’ biggest stars Ethel Waters & Fletcher Henderson were snapped up by bigger white-owned labels who, despite previous racist rejections of black artists, started to see their lucrativeness partly in thanks to Pace’s hard work. The “veil” of racial inequality would soon fall crushingly on Du Bois’ former student.

The pricey Long Island investment unfortunately coincided with an increased interest in black artists by white-owned big money labels & the steady introduction of the Radio into Americans’ homes, inviting the quick closure of Black Swan Records. Pace declared the company bankrupt in December 1923, selling its catalogue to Paramount in an unprofitable deal in ‘24.

With political and economic opportunity tightly constrained, music represented one of the only media through which African Americans could challenge the barriers to social and economic equality. Yet, Black Swan’s focus on a racialized niche market helped make it a victim of its own success. Once bigger white-owned companies saw the success of Black Swan’s advertisements and marketing, it was relatively easy for them to create their own better-financed models of race marketing, which were not based on programs of economic or cultural uplift for African Americans. Even as that chain reaction undid Black Swan’s market standing, however, it had beneficial effects for African American musicians (though generally limited to blues and jazz musicians) and especially for black newspapers, which benefited greatly from the large advertisements taken out by the white-owned companies. (David Suisman)

Black Swan Records would be Pace’s last foray into the music industry, and the Great Depression (1929-1933) created even more barriers in an unequal world for black entrepreneurship & existence. America would not see another black-owned music label until after WW2. Ever an innovator in a world constantly against him, Pace would go on to have success in insurance, finish Law School & set up his own firm Bibb, Tyree & Pace,  before dying in 1943.

Normally we would offer listening suggestions for each label researched, however, as many of these recordings are not available or are of questionable quality due to their age, we would highly recommend following up our short overview by reading D. Suisman’s article Black Swan Records and the Political Economy of African American Music. Lessons from our racist past clearly have not been learnt, however, we can use history to understand our present & to not allow our cruel mistakes to continuously repeat themselves.

All information in our articles is based on research & references. We have the utmost respect for all musicians & people mentioned & if an error has been made, please correct us. ☺