The incredibly talented producer, DJ and good friend of the station, Werkha, returns with new music! Kate meets the Manchester-based artist for a coffee and a chin-wag to get the scoop on forthcoming album ‘All Werk Is Play’, as well as live escapades, the local music scene and beyond… 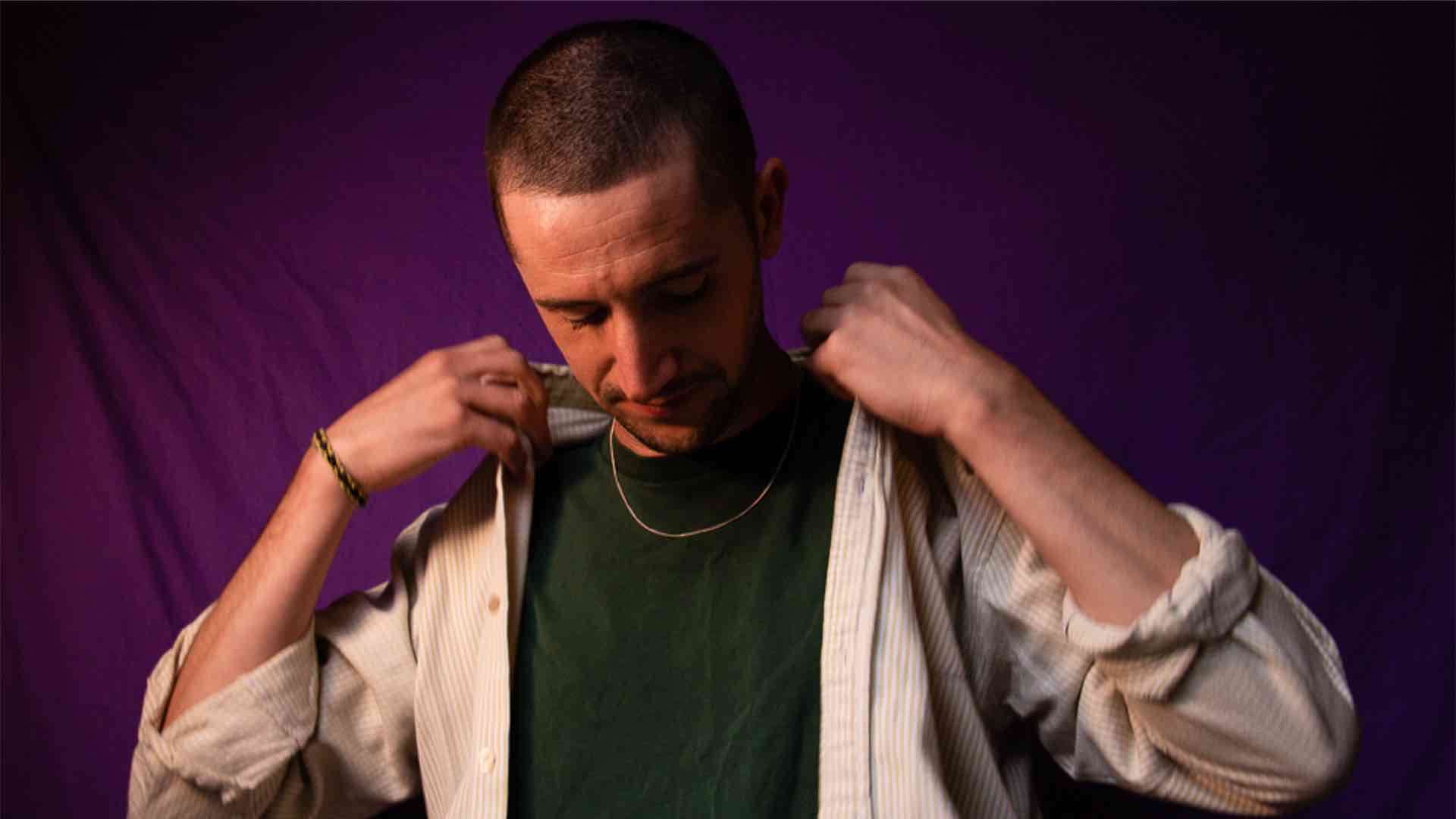 The incredibly talented producer, DJ and good friend of the station, Werkha, returns with new music! Kate meets the Manchester-based artist for a coffee and a chin-wag to get the scoop on forthcoming album ‘All Werk Is Play’, as well as live escapades, the local music scene and more…

It’s a sideways-rain kinda day in Manchester. I walk swiftly over puddles, raincoat buttoned up right to the top as I head to cosy café, Trove, one of Levenshulme’s most Instagrammable spots. I’m eagerly early and base myself next to a plug socket (classic) and order my third coffee of the day. My company for the morning, Werkha, must have received the same memo, as he arrives 10 minutes before we are due to meet – how extremely British of us both.

Werkha, aka Tom Leah, is incredibly friendly and chatty from the get-go, even when sporting a 5/10 hangover. We natter away about various things for at least half an hour without even hitting the record button – about how Levenshulme has been up-and-coming for the past 5 years, but no, this is actually the year! (shout outs to The Gherkin, The Klondyke, Overdraught etc.), cracking the secret code to “making a living from music”, Covid Christmasses and more.

Coming up to an impressive 10 years in the music biz, I ask Tom where it all began. In his early twenties and living between Salford and Cumbria, Tom made 3 tunes ‘which were alright. I didn’t really have anyone to share them with except for my friends, and one of them told me to send this to someone because it’s pretty good. I sent it to a little imprint called Cool Kid Music *double peace sign* who agreed to master it and put it out’. Tom highlights the importance of plugging material to people directly, which he did then and still does now: ‘it’s nice to hear these things straight from the horse’s mouth. On an absolute rogue one, I sent it to Roska, Scratcha and Quantic via Soundcloud, which at the time felt like an alright place to be doing that kinda thing. I also found Gilles Petterson’s email address on his BBC page (which they definitely don’t do now!) and amazingly, Gilles played it.’

Following the support of such tastemakers, Tom came to release 4 EPs and 1 album on Tru Thoughts (through none other than Quantic’s recommendation), before signing to First Word Records, also home to Manchester’s Children of Zeus and [ K S R ]. We talk about the importance of maintaining creative control when working with a label, where Tom adds that First Word left him in charge not just of the music but the artwork and campaign as well, an approach ‘more in line with me being a control freak! I’m not saying labels are gonna become defunct, but as an artist I think you need to be in control of your catalogue’.

Which brings us to his brand new double single, ‘Eterno Retorno / In Saint-Gilles’, available now both digitally and on 7” vinyl. Tom is clearly excited about having some European-facing collaborations, with ‘Eterno Retorno’ featuring the glorious Portuguese vocals of Moreiya and ‘In Saint-Gilles’ born from trading stems over lockdown with Brussels’ Le Motel. We chat about the excitement of collaboration, as ‘unexpected things can happen’. Tom recalls collaborating with Manchester-based rapper Chunky for a track on the forthcoming album: ‘when he hit a brick wall coming up with bars, he’d throw it in my direction. I was doodling a response to what he was spitting on a scrap piece of paper and he would bounce off it – even if it was something to laugh at for a second, it might spur something else. Those little catalysts are really nice.’ We also discuss the importance of being able to communicate: ‘Collaboration is friendship –  when you’re spending all this time together and going to deep places. It’s exposing, so you want to know you can trust someone’.

Tom explains how these tunes are the introduction to forthcoming album, ‘All Werk Is Play’, landing in April on First Word Records. We talk about the process and how an album is ‘like a masters or PHD or something – after working on it for 2 or 3 years I’m just really excited to get it out, and quite relaxed with it as well. I’m following the music on this one – I know how it goes down live and I know I’m happy with what I’ve made, so I’ve reached a point where everything is crossing over nicely.’ Tom’s attitude is admirable on this one; what’s clear throughout our whole chat is his sheer passion for music and a quiet confidence in what he does. This is definitely the work of someone who has honed in their craft, found their sound and isn’t in it for fame or money, but simply for the love of doing it.

Although the full release isn’t available until April, Tom will be staggering the release of tracks to ‘allow people to hear them bit by bit and pay each track their dues’. Though if you were lucky enough to get a ticket for last Thursday, you’ll have heard the whole thing live with Tom’s full band (including not one, but two flautists!), as well as his collaborators Moreiya, who played together for the first time due to lockdown. Although it sounds nerve-wracking, with a faintly anxious air of ‘right, hope this works!’ Tom explains how one thing that’s clear with his live set is simply having fun: ‘I think it’s important to remember to connect people to an organic sense of music – we’re here doing this thing together and not taking ourselves too seriously. That’s why making stuff is exciting for me – to then put it into a live situation and play with it and change it slightly. The music comes alive in a different way.’

As cutlery shakes and rattles in the distance (a sample to be heard on the next Werkha album), we rather ironically shout about how nice intimate gigs are in comparison to big shows. While Tom has previously toured with the likes of Bonobo, which taught him a lot over the years, most recently you would have found him at Whalley Range’s The Carlton Club with their own sound system, visuals and live bands. ‘At some point I want to do a full whack show with everyone on the album – harp, clarinet, sax, brass, vocals – but I do really like the intimacy of smaller shows. I don’t like it when there’s a barrier between the crowd and the music’. He adds how valuable it is to have a good understanding of the space for your music, in Tom’s case it’s ‘small basement venues, where it’s gonna get a bit sweaty. It’s a buzz and feels a bit like a club night in that sense’. Speaking of which, Tom is also a prolific DJ, having played alongside the likes of Mr Scruff, O’Flynn and Rebecca Vasmant, to name a few. I ask Tom what similarities and differences he finds between live and DJ shows. ‘The live show is like an organism growing and changing all the time. You have that DJ mindset of feeding off the crowd and their reaction to certain moments and considering the ebb and flow of the set, so that’s quite similar’. He also recalls his latest show at Jazz Café in Camden, where ‘I was really reassured that people were getting excited by the same moments as I’m getting excited by in the new material’. As Tom tries to top up my water with the water bottle lid still on, we laugh and realise that playing live is basically a ‘social psychology you’re tapping into… I think that’s why I like music in general. Moments of anticipation – what’s next, what do people expect. It’s like a social experiment, innit?’

Continuing the biology theme, we move onto the Manchester music scene which Mancunian-native Tom describes as ‘fertile’ – ‘it’s a weird word to use, but d’you know what I mean? It’s really vibrant with really good crossovers between genres and people listening to each other’. However, he cites that now is a difficult time for emerging artists, with ‘the landscape having been impacted by the last couple of years and less risks taken on up-and-coming acts. I can’t pay enough respect to the history of the city with Factory and The Hacienda etc, but that same excitement and space for new things that existed then needs to be here now as well’. However in spite of this, venues such as Low Four (where Tom’s latest gig took place) are striving to get more live electronic acts through the door, alongside Reform Radio launching initiatives and schemes for young people looking to kickstart their music career. We agree that although lockdown had many negative effects on our industry, the DIY aspect feels more prevalent now than ever.

If you missed Tom’s live show this week, keep an eye out for some dates off the back of the album, including some local bits here in Levenshulme. His album ‘All Werk Is Play’ will be landing in April on First Word Records. In the meantime, check out Werkha’s last visit to Melodic Distraction with special guest SheBeKeke below!