This Thursday, our friends and hip-hop collective Boom Bap continue their monthly residency at our cosy little spot off Constance Street. This time, with what promises to be an electrifying headline show from Liverpool-based Congolese and British rapper and artist, Blue Saint! 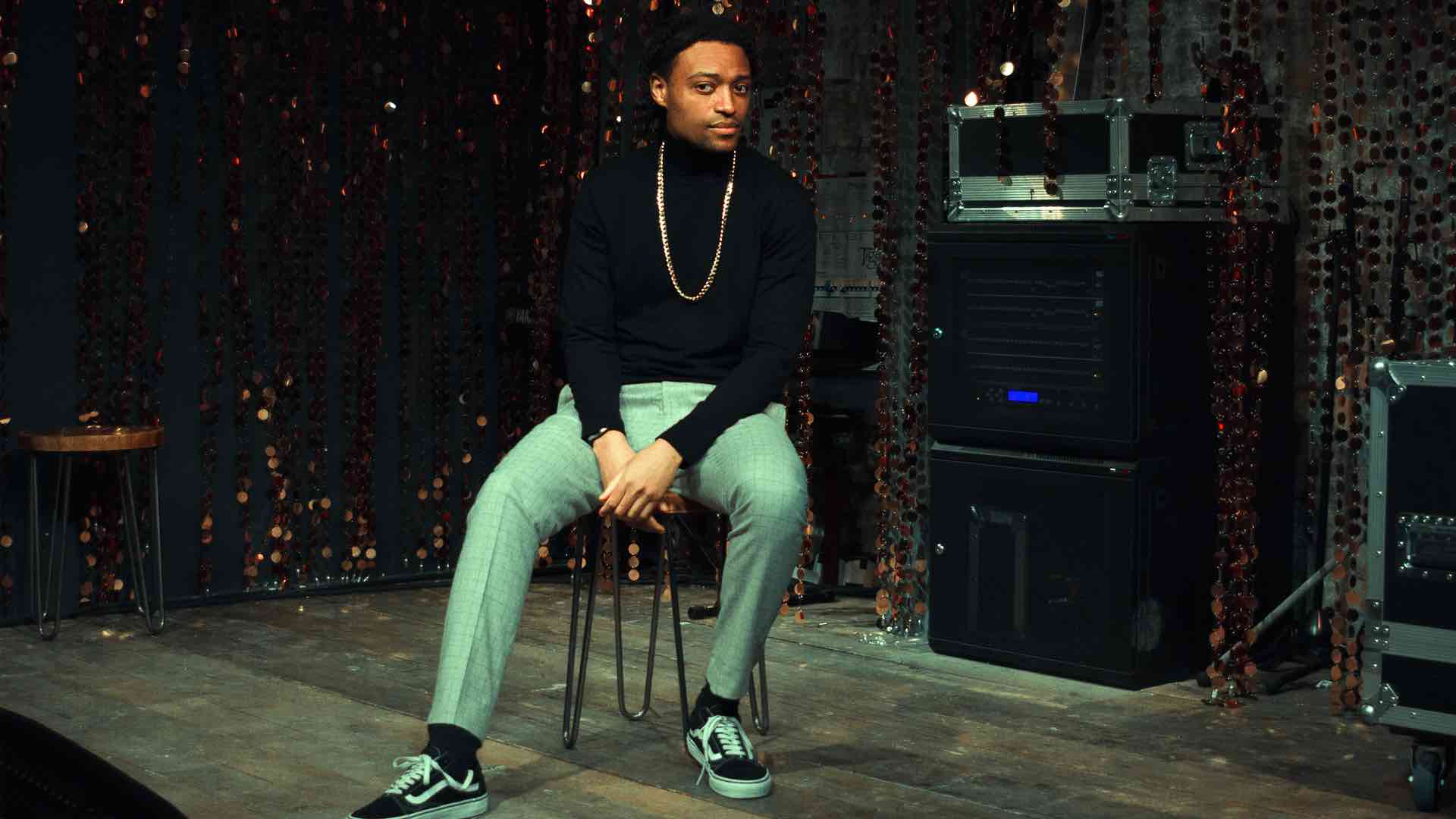 Over his music career, Blue Saint has developed an eclectic musical style that combines and blends elements of hip-hop, RnB and electronic music. His lyrics often incorporate a range of political, social, philosophical and cultural references, with themes of social injustices and projects conceptual in nature. Not only has Blue got a MOBO nominee and The Poetry Society’s SLAMbassadors Winner Award under his belt, he’s also performed alongside Akala, Plan B and more huge names. We were delighted to catch up with Blue ahead of his headline show, which anticipates the release of his next album ‘Mémoire’.

Hey Blue Saint, we’re really excited for your headline show at Boom Bap! How did you first get into music?

Thank you, I’m so happy and excited to be doing it! How I got into music is actually pretty random, it was just born from boredom really (laughs). I come from a very creative family, so have always been creative. In the house to fill up boredom I’d write and create stories, play around and act as different characters. One day I tried my hand at writing at rap and came to really love it, because it allowed me to merge storytelling with music.

What are the ideas behind your latest single ‘Calypso’?

‘Calypso’ uses the story of Odysseus and Calypso from Homer’s ‘The Odyssey’. It creates an extended metaphor exploring feelings of depression and isolation, written at a time when I was feeling low and stuck, almost as if I was stranded on an island. The song focusses on a character I created who lives in my paracosm ‘Mynd’. The song is closely related to another one of mine called ‘Lamith Tramell’.

That’s a very good question! For this song in particular, I wasn’t really listening to much outside of it. The main thing for me when writing ‘Calypso’ is that it paired well with my previous songs ‘Lamith Tramell’ and ‘Macabre Hearts’. I wanted all three songs to be connected, as their characters are all in the same world: ‘Lamith Tramell’ is the personification of temptation and ‘Calypso’ the personification of depression, and they both reside in my world ‘Mynd’.

Would you say your sound has evolved since your 2018 debut album ‘Mynd & Pensus’? If so, how?

Yes, definitely. ‘Mynd and Pensus’ is more of a double EP or compilation album, as it combines two of my previous EPs, ‘Enter Mynd, Part I’ and ‘Enter Mynd, Part II: Sociation’. The latter was an introduction into my inner world; it was very fantastical, more abstract, and I would layer a lot of my thoughts and feelings with a large amount of metaphors and imagery. Creating music with layers is still something I like to do, however on my more recent songs I’ve become a lot more direct and vulnerable. In the past, I was a lot more afraid of revealing that side of me.

How do you usually prepare for a gig? Any pre-show rituals?

I have to go over my music on the day of my performance, making sure I have a good grasp of my set list. I feel weird if I don’t. I also usually don’t like to eat anything at least two hours before I perform. I pray everything goes well and I like to remind myself that I’m about to do something that I love, so just have fun – that usually helps keep the nerves at bay.

What’s been your favourite gig to play so far? Who would be your dream artist to perform alongside?

That’s another good question! Performing at the Royal Albert Hall in 2016 was my most memorable performance. I had so much fun; I was incredibly terrified before I went on stage, it was the largest number of people I’d ever performed to. But it was so incredible, I got a real euphoric and electrifying feeling from it. The next one would most likely be performing at ‘Sumati Sundays’ and LIMF in 2019 at the Zanzibar, then performing at ‘Late at Tate’ in February 2020 just before lockdown kicked in.

In terms of dream artists to perform alongside, oh wow, too many! Lupe Fiasco would definitely be one, and Nas. Jay Z’s got one of the best stage presences I’ve ever seen, so performing alongside him would be dope too. You know what, throw Eminem in there as well! But if I could only choose one, it’d be Lupe first.

Are there any other local artists you’ve got on your radar at the moment?

Dayzy’s absolutely smashing it! Dead happy and proud of him and can’t wait to see him perform at the Boom Bap show. Cola Museum is an amazing artist, I love how his music is so dreamy and different, it’s got this left field feel to it. The Bedroom Beatmaker is another one people need to keep their eyes on, making experimental and cool art with his music, chopping and creating fresh tunes. Dorcas Seb, Reklaw Beats and Bobby Thomas Jr also known as PaperPlates, Jazmine Johnson, Illy1… The list goes on!

I’m an artist-in-residence at Tate Liverpool and have a performance there this Saturday (6th). I’ve got another performance on Friday 3rd December at The Kazimier Stockroom, followed by another single release. My new single ‘Sweet Waters’ is out now on all platforms, with my debut independent album ‘Mémoire’ set for release in Spring 2022.

Pre-order Blue Saint’s forthcoming album ‘Mémoire’ here and get three exclusive tracks. In the meantime, check out ‘Sweet Waters’ below, and get yourself down to Boom Bap for Blue Saint’s headline show at Melodic Bar tomorrow, with support from Dayzy, Cola Museum and Raven Radha.