It’s International Women’s Day! And to celebrate, we’re shining a light on the female-orientated collectives doing absolute BITS for the sisterhood of the North West.

From Liverpool’s Go Off, Sis Hub to Manchester’s The Beatriarchy, there’s DJ collectives, online platforms, Facebook groups and much more designed to specifically provide a safe space for women to come together to collaborate, share music and talk about their own experiences. With mix series’, live-streams and online events to name a few, there’s plenty of opportunities for anyone looking to get involved with their local music scene and/or simply to build new connections and feel part of a community. We’ve spoken to six collectives below to find out a little bit more about them, what they’re planning for International Women’s Day and how to get involved. Sisters, let’s connect!

Go Off Sis, Hub is a Liverpool-based community-focussed platform, which originally started out as a podcast in March 2019. Realising that the label of a podcast could be limiting, a rebrand was in order and GOS HUB was born!

Ran by Mimi, the main aim of the hub is to amplify the voices of the unheard and underrepresented. “As a Black Northern Woman, I find that I naturally advocate for that group, whilst still championing people outside of that bracket who are struggling to be heard.” When asked where she sees the music industry in 5 years time, Mimi answered “representation is so important, specifically for black women of a darker skin tone. There is blatant colourism within the music industry and it shouldn’t be up to the women who are hurt by this to speak out on – it should be up to everyone, including myself. Everyone deserves to have role models who look like them, and it’s something that we need to see more of, but until everyone takes accountability, these things won’t change.”

On International Women’s Day, GOS Hub will be announcing “Women Making Waves – The black women doing big tings”. A short series throughout March, featuring virtual chats with four incredible women from the music, fashion, art and beauty industry. Keep your eyes on IGTV this Wednesday for the first, and sign up to the GOS Hub mailing list to stay up to date! 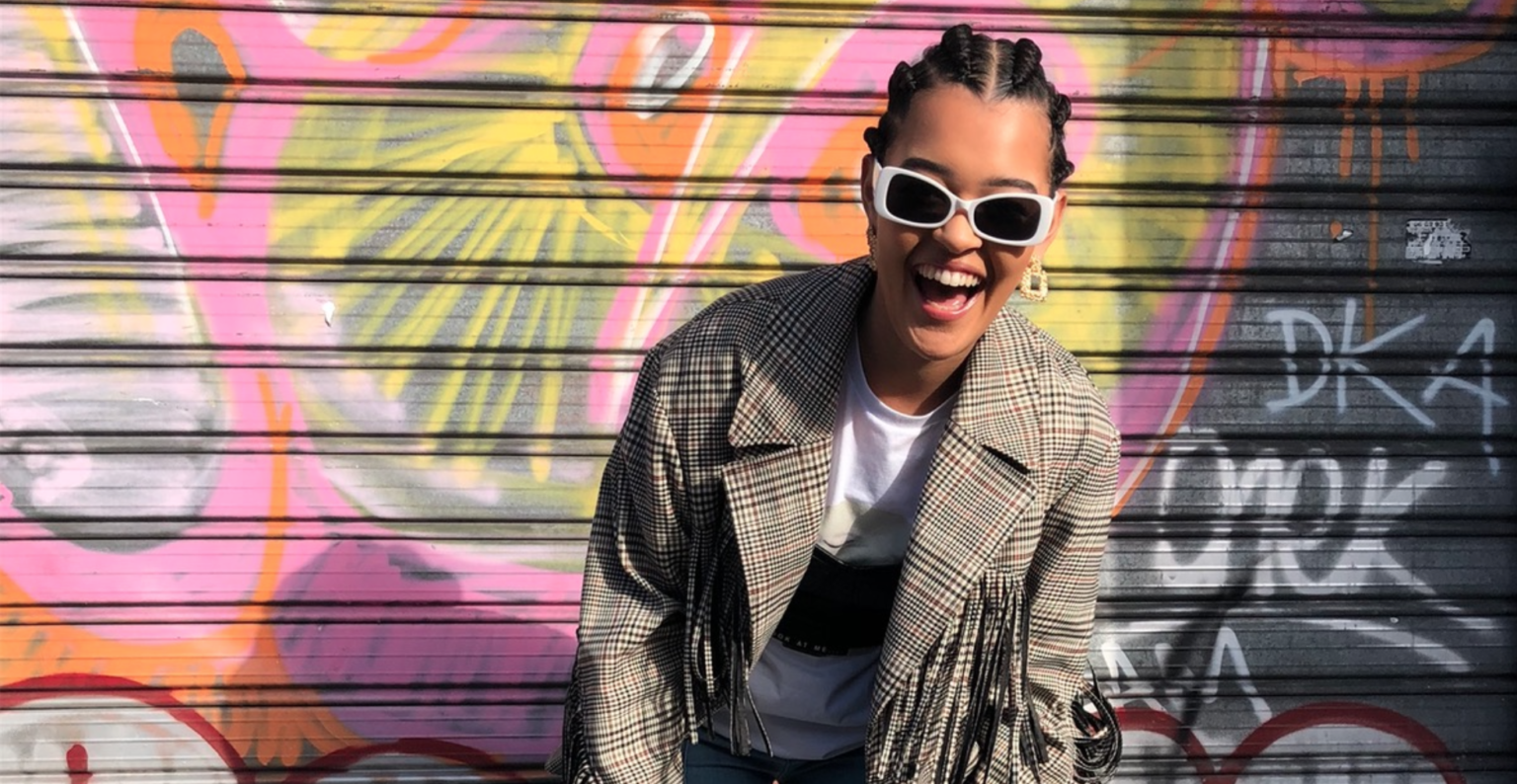 Rhythm Lab Records is the partner label of Reform Radio, striving for equity, collaboration and experimentation.

Since the first Rhythm Lab release in 2018, the reigns of the label were handed to 7 young creatives to steer until May. Through Reform Radio’s Youth Music funded Career Start Programme, and under the tutelage of Mike Burgess (Sound With Mike), the new team will be learning the ins and outs of running a label first hand, with their first releases in April.

The releases aim to support local artists in collaborating with each other across different genres, continents and levels of experience. Ethical music distribution is also a big priority, with a 60/40 royalty split in favour of the artist as well as creating a supportive atmosphere and lasting relationships with the artists. “In five years time we would like our deal to be far more common than it currently is. We want musicians to have agency over their creations and opportunities to be paid for their work without being exploited. We also want a safer industry for everyone, with more opportunities created for underrepresented groups to develop their skills and build their networks. We believe that artists should be able to make music in a space they feel welcome in and where they can completely be themselves.”

For International Women’s Day, Rhythm Lab are hosting a free online event ‘Girls Just Wanna… Have Independent Music Careers’ in collaboration with Reform Radio. From brand building to the distribution process, this is a safe environment for cis women, trans women and non-binary people to share their experiences and develop their skills, concluding with an in-conversation with Jamz Supernova. They are also announcing an IWD fund as part of their ongoing commitment to creating a more inclusive music industry, which will pair six artists to work on a 3 track compilation. Submissions are open now to cis and trans women as well as non-binary people who feel comfortable in a space that centres women’s experiences – to apply, send a demo and 250 words about yourself/your music to emma@rhythmlabrecords.com.

Where are the Girlbands? is a project dedicated to the celebration of women creatives in the Liverpool music scene. Run by school friends Ella and Eve, their online platform promotes local women artists, makes the Liverpool scene more accessible for women and encourages open discussions.

Also making up electronic duo Smallmouth, WATG? was born from a realisation of the live scene Ella and Eve found themselves in. “We were planning an EP launch and discussing who we could fit the bill with, and were ashamed to find that we couldn’t name more than three female artists from Liverpool.” Often being talked over, not introduced properly, having their instruments carried or kit set up for them, they found that they became easily subjected to subconscious microaggressions. As much as the project was initially about establishing a sense of solidarity and visibility with other women on the scene, it’s also about creating a space for discussion to raise awareness, which reaches men too. “In five years time, we hope to see more women in roles ‘behind the scenes’ e.g. sound engineers, promoters, stewards… It makes the space so much more accessible for women musicians.”

For International Women’s Day, WATG? have curated an online zine made up of submissions from their followers, including interviews, poetry, art, music and more. They’ve also recently launched a new IGTV series, kicking off with a panel discussion from promoters at Bitch Palace, WeWantWomen and Degenerate Productions. Stay tuned for more roundtables, interviews and conversations, as well as merch drop of tote bags with 50% of profits going back to the artists and the other 50% to local foodbanks!

Want to get involved? Why not send WATG? A DM over on their Insta, or drop them a line at wherearethegirlbands@gmail.com. 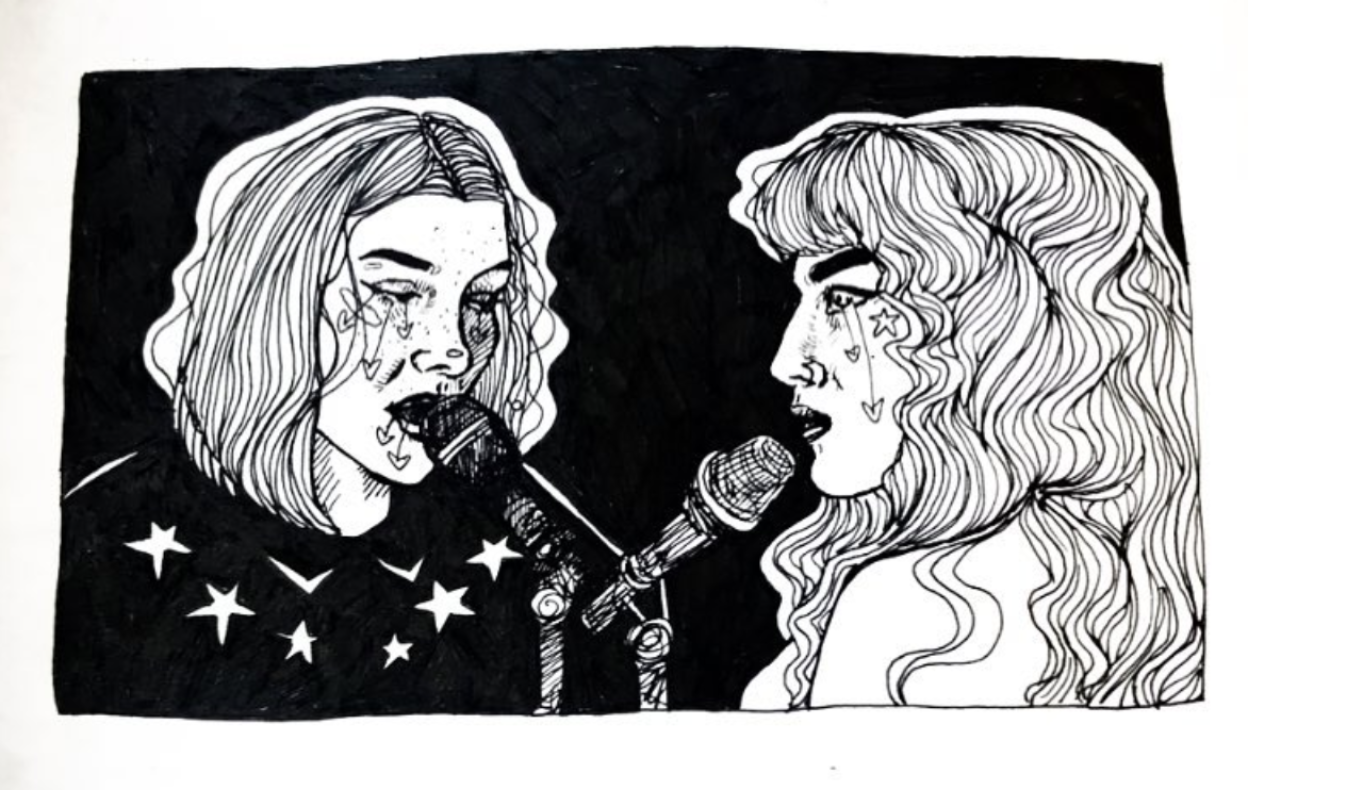 The Beatriarchy are a safe, inclusive online community which aims to amplify underrepresented groups such as womxn, LGBTQ+, Black, Asian and other ethnic minorities in the underground electronic music scene.

Run by DJs Kitsta and Gracie T from Manchester and Sheffield respectively, The Beatriarchy was born from Gracie being mansplained to one too many times on white male-dominated tuneshare groups. “We got chatting and agreed that a lot of the online Facebook communities were gatekept and biased towards straight white males. We decided it was time to level the playing field and shine a light on those underrepresented voices, and so we started our own tuneshare group on Facebook, The Beatriarchy. It has now grown into an amazing online community and we’ve just launched our mix and interview series on Foodhall Radio and Soundcloud.”

In 5 years time, Kitsta and Gracie hope to see more underrepresented groups become empowered to pursue their musical journeys and feel comfortable enough to take risks and push boundaries. “It is fundamental that big brands, organisations, labels and promoters take measures to level the playing field and make a conscious effort to combat inequality in the scene – change doesn’t just happen. Then, hopefully, we’ll be seeing women being featured in the industry for their talentand not just being a token.”

Follow The Beatriarchy’s mix/interview series on Soundcloud, which so far has seen Rani and salvage talk about what inclusivity in the music scene means to them. And if you’d like to get involved, join The Beatriarchy Facebook group here!

All Hands On Deck

All Hands on Deck is a collective for women, trans and non binary DJs. Throwing ‘open deck’ parties since 2018, the open mic style nights provide a low pressure, fun environment for people to try their hand at DJing.

As well as running workshops, production courses and a residency on Reform Radio, AHOD have an ongoing mix series that showcases collective members, as well as artists and DJs they admire as a collective. “In the past three years since we started All Hands on Deck, we’ve seen loads of amazing feminist collectives popping up around us – this fills us with hope for the future. We hope to see foundations continuing to be built for a music industry that holds in high regard people from across the gender spectrum, as well as practical changes to address the racism that exists within the music industry.”

If you want to celebrate IWD at home, check out the A.H.O.D mix series above – there’s contributions from women, non binary and trans artists from the collective and beyond, with a new mix coming out from Iceboy Violet on Monday. If you’d like to get involved in the collective, drop them a message on Insta to join their Discord service. 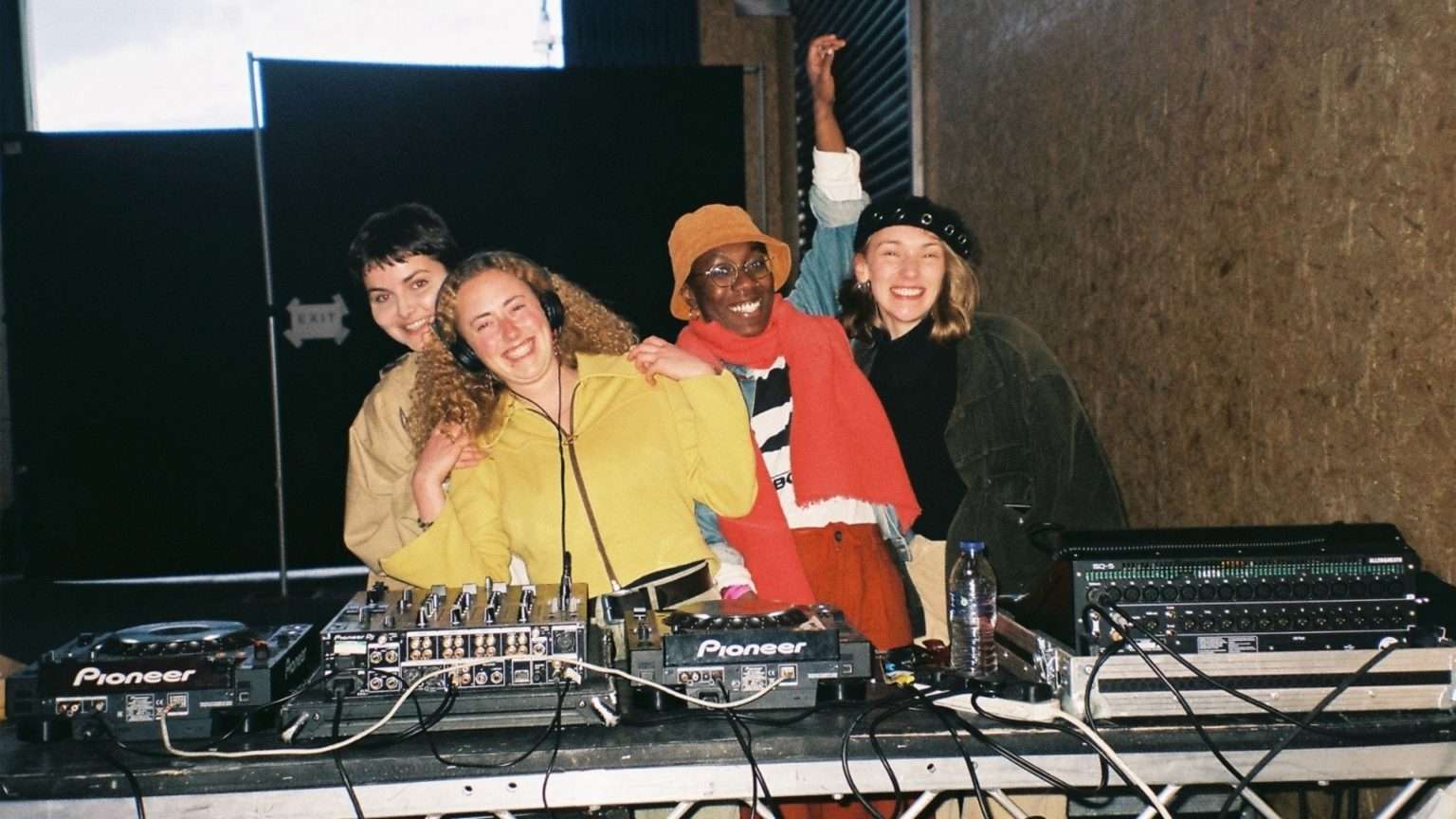 All Hands On Deck

Meat Free create the most open and warm dance-floor, welcoming everyone to hear and dance to the best techno there is.

With 7 years in the game, Meat Free champion new artists, bringing a few debuts to Manchester as well as fostering a good promoter community behind the scenes. While the world around them has gradually started to change for the better, they’d like to see real change continue to happen – not enough peers are taking a stand against systematic problems such as sexual assault, for fear of losing status or bookings. “Despite good schemes and initiatives to combat blatant inequalities in dance music, such as incredible work by Rebekah and the For The Music campaign, it’s still not nearly enough.”

For International Women’s Day, Meat Free’s aalice will be closing down the Suffragette City live-stream, alongside Danielle Moore, Afrodeutsche and more. Happening across 12 hours in Manchester at The Refuge and The Carlton Club, the stream is raising money for grassroots charities supporting women and gender minorities – you can donate here and join the event here. In the meantime, keep the faith as Meat Free will be back soon! 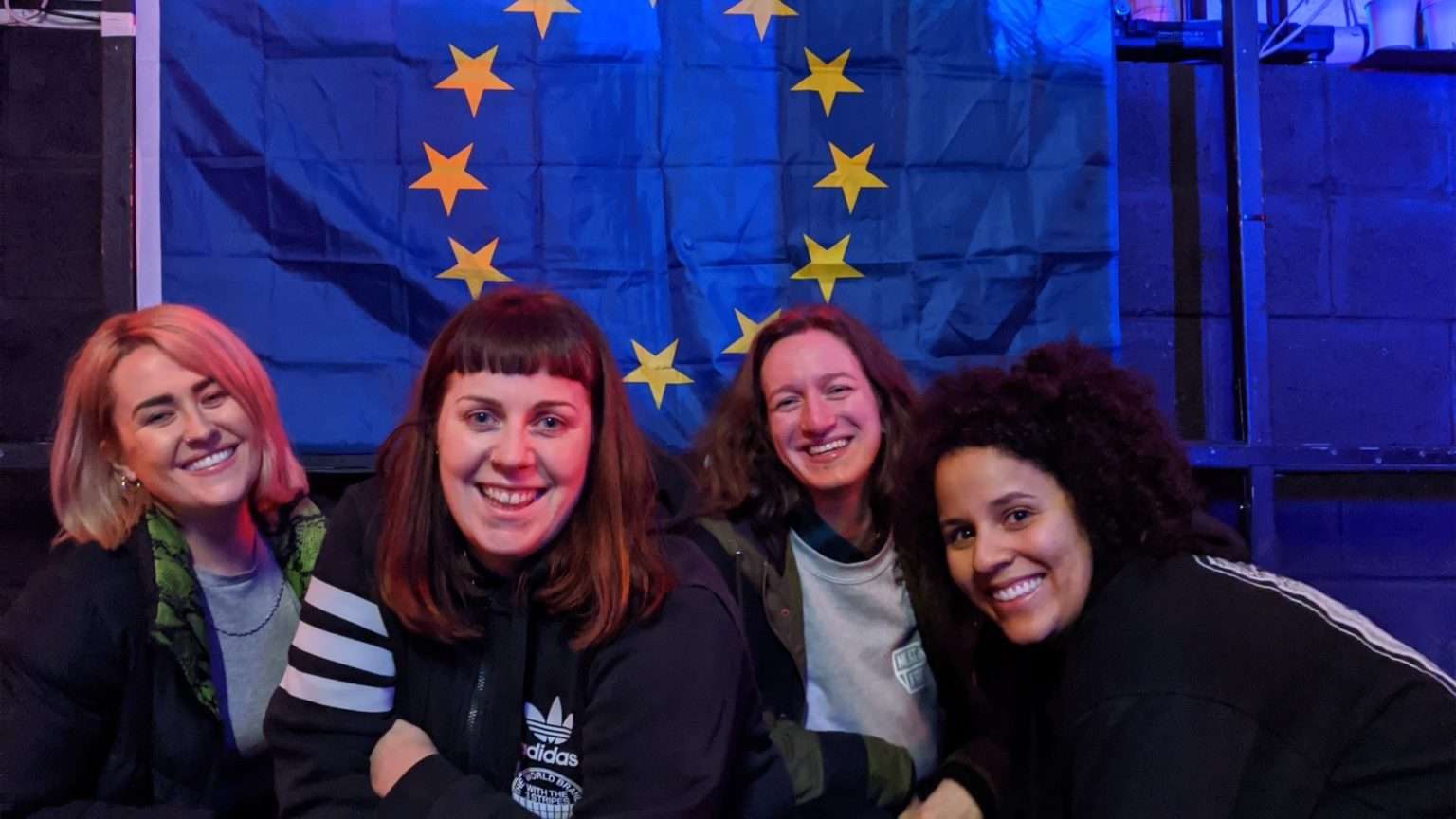 Melodic Distraction Radio are programming a day dedicated to women for International Women’s Day, highlighting important platforms that champion female, female identifying and non-binary participation in the North West. Join us from 9am for guest shows from The Beatriarchy and Shifting Spheres, plus past Artist Focus shows spotlighting legendary female artists including SOPHIE, Kate Bush and Alice Coltrane.